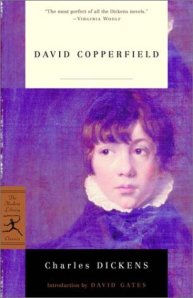 David Copperfield by Charles Dickens is considered to be his most autobiographical work.  As such, one would expect a certain amount of realism and empathy to be present in this book, perhaps more so than in any of his others.  Fortunately, this proves to be the case.  In comparison to Oliver Twist, for instance, which tackles many of the same themes as this book (most noticeably child orphans and neglect/abuse) David Copperfield proves to be much more effective, in that the story seems more grounded in reality and history, the characters seem more genuine, rounded, and believable, and the overall resolution takes into consideration not just the main character, David, but also those surrounding him – many of whom became important, cared about players in the story.  The honesty of this book elevates it above others’ of Dickens work, such as the historical A Tale of Two Cities which, while entertaining and interesting, does not quite connect as well on a human level.  David Copperfield is much more in sync with Dickens’s later works, such as The Mystery of Edwin Drood, in that you can sense Dickens in this book – his struggles, sorrows, triumphs, and haunting memories.

Oftentimes, my second biggest gripe with Dickens is that his characterization and character development are almost non-existent.  He typically seems to employ static characters to represent the good and bad elements of life and nature.  The good characters, like Oliver Twist, are wholly good – sweet, innocent, naïve.  The bad characters, like Fagin, are just downright evil.  To an extent, Dickens does some of this in David Copperfield.  There are no redeeming qualities in Mr. and Miss Murdstone, for instance.  They are cold, hostile, devious siblings – and their motives are always clear and unchanging.   Uriah Heep, the anti-hero to our David, and his mother are quite easy to despise, particularly when they try to gain sympathy by proclaiming their “’umbleness.”  Similarly, there are the good characters who do no wrong – Peggotty and Mr. Pegotty, for example, are true friends to David and prime examples of hard work, kindness, and friendship.  There are in this tale, however, a few conundrums – people the reader can love sometimes and hate at other times.  Mr. Micawber, for example, is a good guy who keeps making bad mistakes.  Steerforth, too, though relatively easy to despise, also inspires a certain amount of empathy.  Even, and perhaps most importantly, the main character David can be exhausting at times but, ultimately, he is real and we root for him and his happiness in the end.  Of the six Dickens novels I have read so far, this is by far the closest Dickens comes to creating a world of roundness – believable characters, with both flaws and saving graces.  From Aunt Betsey to Mr. Traddles – Barkis to Dora Spenlow, these characters are interesting to watch because they can be surprising, which is something, I feel, Dickens stories often lack.

The first argument I typically have against Dickens is that he says far too much.  He is unnecessarily long-winded most of the time.  Sometimes, it is in an attempt to be funny but, typically, it just seems to be “because.”  For the first quarter of the book, I feared David Copperfield was doomed to this failure – as many other Dickens works have been.  Fortunately, as it happens, I was quite wrong.  Although the first portion of the book was a bit of a drudge, the rest of the book was written beautifully.   As the story picked up and became more complicated, with David Copperfield establishing himself in business, falling in love, breaking friendships, and traveling abroad, the language wove an interesting web around him and his journey, one which connected the reader to David and encouraged him to come along, to see what happens, to experience what David was experiencing.  Dickens seemed to set aside the pretension with which he usually crafts his prose, in favor of a sophisticated but straightforward language.  It is possible that, the story being so near to Dickens personally, he felt less need to raise the language above it – as he does in his more didactic tales (where the prose often breaks into lecture and humorous diatribes).   Although I was not entirely satisfied, it was the closest I have come to being so.

4 – Additional elements are present and enhance the story.

What is most rewarding about this book, particularly for one familiar with Dickens, is that he manages to get his point across without the preaching he does in so many other books.  This is clearly a story about perseverance, growth, and interpersonal relationships but, rather than try to convince the reader of this through narrative lecturing, Dickens accomplishes it through the story-telling itself.  All creative writers are at some point taught to “show, not tell” and while it may seem trite or cliché –perhaps even out of mode these days- to mention it, there is still much to be said about a writer who can show his reader what he means, without telling them.  This is exactly what Dickens accomplishes with David Copperfield.  If you can slug your way through the first three hundred pages of the book which, in my opinion, are rather slow, lofty, and indulgent, the reward is another five hundred pages of touching humanity in print – a boy, abandoned, is found and in the process, finds himself, not without stumbles and misjudgments along the way.  This is perhaps a Victorian equivalent of Twain’s Adventures of Huckleberry Finn – less gritty and certainly haughtier but, ultimately, a satisfying tale of love, family, friendship, and coming-of-age.

“Whether I shall turn out to be the hero of my own life, or whether that station will be held by anybody else, these pages must show.”

‘”Never,” said my aunt, “be mean in anything; never be false; never be cruel. Avoid those three vices, Trot, and I can always be hopeful of you.”’

“Accidents will occur in the best regulated families.”

“Ride on! Rough-shod if need be, smooth-shod if that will do, but ride on! Ride on over all obstacles, and win the race!”

“There can be no disparity in marriage like unsuitability of mind and purpose.”

← Review: The Lover’s Dictionary by David Levithan
Review: The Library of Shadows by Mikkel Birkegaard →