Review: The Warden by Anthony Trollope 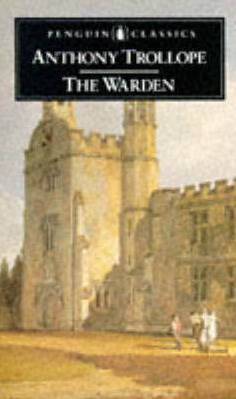 The Warden by Anthony Trollope

The Warden is a little book with a big story.  It tells the tale of Mr. Harding, a clergyman and Warden of an almshouse in Barchester.  The twelve old men who live in this almshouse hear that they might be entitled to a certain monthly or yearly stipend, of which the Warden (and all wardens before him) has been keeping for himself.  The Church sinecure suddenly finds itself at the center of a larger public outcry against Church corruption in general, and our poor, good-hearted Warden, who wants nothing more than to follow the law and do what is right, even at the cost of his wealth and his employment, is exposed to great ridicule in the county newspapers, who care nothing for the truth or for Harding’s laudable attempts at settling issues amicably and fairly.

Perhaps the greatest moment in the book is when the narrator is railing against purely evil and purely saint-like characters (in reference to Charles Dickens’s oft cut-and-dry characterization).  Trollope clearly appreciates characters who are more realistic, with elements of good and bad – shades of grey – within each.  He achieves this here, with the possible exception of Archdeacon Grantly, who seems to be, simply, a jerk.  Take, for example, Mr. Harding’s dear friend, the Bishop.  While he is a kind and generous man, he is also too soft, at times.  Mr. Harding, while genuine and honest, has a nervousness and self-consciousness which sometimes restricts him from confronting more forceful personalities, even when he knows he is right.  Harding’s daughter is devoted to her father, but in such a way as to be almost blinded to the possibility that he is capable of making mistakes, too.  So, each of the characters, the good and the bad, have elements of the opposite in them.  None are perfect – all are flawed.  This makes a believable story even more realistic, because every reader can find something of him/herself in these characters.

While the story was interesting and the characters were believable and fun, the narrative itself sometimes dragged.  Trollope’s style is not quite grandiose, but is somewhat dry and dense.  Trollope tends to take a mile to describe what could be explained in a yard – he will go on about, and revisit, the same scene or theme over and over again, so that it sometimes feels like the story is going nowhere or, while it is moving, it is moving in circles.  This made a rather short novel (about 180 pages) feel like a thick tome and it took far longer to read than would be expected.  It reminds one, in a way, of a less-flowery Proust or a less-suspenseful Radcliffe; Trollope, like these formers, is a writer who seems to like the sound of his own pen.

Trollope’s story is interesting, in that it simultaneously ridicules both the Church of England and the Church’s foes, the “reformers.”  One of the most delightful elements of the story is its use of satire and parody.  Readers will find, for instance, characters who have been enlarged for parodies sake, but who are distinctly recognizable as popular writer-reformers of the period (he pulls no punches against Charles Dickens, for example, in his characterization of “Mr. Popular Sentiment”, and he does the same of Carlyle, who is written in as “Dr. Pessimist Anticant.”  Apparently, Trollope is well-known for satirizing the Church, and he certainly does so here – from the poorest alms men to the general clergy, and right on up to the sweet but bumbling bishop.  Leaving this grand element and general setting aside, though, what one finds is an exploration of the human conscience.  Trollope places his main character, Mr. Harding, in direct opposition to characters who exemplify different elements of the human nature; where Harding is honest and sincere, we find the newspaper man, Tom Towers, to be hypocritical and conniving; where Mr. Harding is simple and self-sacrificing, we find his son-in-law the Archdeacon to be bombastic, domineering, and selfish.  These personality contrasts and the exploration of humankind is the heart of the novel.

“One evening call is worth ten in the morning.  It’s all formality in the morning; real social talk never begins till after dinner.  That’s why I dine early, so as to get as much as I can of it.”

“A man may have the best of causes, the best of talents, and the best of tempers; he may write as well as Addison, or as strongly as Junius; but even with all this he cannot successfully answer, when asked by the Jupiter.”

“A clergyman generally dislikes to be met in argument by any scriptural quotation.”

“There are some points on which no man can be contented to follow the advice of another – some subjects on which a man can consult his own conscience only.”

“What on earth could be more luxurious than a sofa, a book, and a cup of coffee?”

–The Warden was Book #6 completed for the Victorian Celebration.

← Please Welcome: The Jane Austen Society of North America (#AustenInAugustRBR)
10 Posts to Get a Glimpse of Me! →

4 Comments on “Review: The Warden by Anthony Trollope”