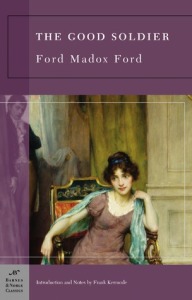 Plot/Story:
3 – Plot/Story is interesting and believable.

The Good Soldier: A Tale of Passion is considered to be (by its narrator) “the saddest story” ever told.  The implication is that it is sad because of what happens to the narrator, or because he missed (and misunderstood) so many important things in his own life – events, situations, etc. which were hidden from him and which, had he known about, may have changed his life for the better, even though these things were not-so-great things.  This isn’t the real reason why it’s the saddest story, though.  It’s sad – so sad – because, well, I’ll let other readers figure that out (it’s NOT because people die).  The story’s “good soldier” is Edward Ashburnham, who might be a decent soldier, but is a rather terrible person and a very terrible husband and friend.  The story revolves around two adulterous events and how those events eventually impact John Dowell (the narrator), who only learns about them much later – he must go back and reconstruct events, out of sequence, to find out what he never knew he knew, all along.  The title is sarcastic (it was changed after World War I from “The Saddest Story” due to the possibility that the original title might have seemed insensitive or pandering, considering recent events), the story is depressing, and the delivery is groundbreaking.

Nothing in this book is as it originally appears, and this includes the characters.  This is also the point.  John Dowell is looking back on the events of his life, looking back on his friendship with Edward Ashburnham and his wife, Leonora, in particular, and trying to figure out what the heck happened.  John and his wife, Florence, plus the two Ashburnhams were all such good friends!  Except, they really weren’t.  The story that unfolds is John trying to figure out who exactly these people were, why and how they deceived him, and what it meant for his life – for the time he ultimately wasted on them all.  There’s also a tricky little twist wherein John would lead us to believe these four characters are the main four – but guess what?  They’re not!  There’s a mystery fourth who is mentioned modestly throughout the first half of the book and then shows up in the latter half to become largely important to Dowell (and to eventually sort of explain why this is such a sad story).  We get plenty of characteristics about each of the characters, but all through John Dowell’s eyes, and it’s not long before you realize that you can’t exactly trust anything Dowell is saying – not because he’s a liar.  He’s not necessarily “untrustworthy,” but he is absolutely unreliable.  If he doesn’t ever know what’s going on, how can we expect him to tell us?  Still, the Ashburnhams, Florence, young Nancy, and the few minor characters who show up (Edward’s lovers, Florence’s lovers, family members of the “main four,” etc.), are clearly who they are – distinct personalities, but all subjected to the delusional gaze of a bizarre narrator.

This was my first experience with Ford Madox Ford, and the first impression about his style amounts to two reactions:  1) What. The. What?!  and 2) Brilliant!  Ford was clearly a precursor to (or co-conspirator with?) Joseph Conrad, in terms of style and structure.  These two, together, created what is perhaps, now, one of the most important characteristics of modernist narratives (think The Great Gatsby), by which I mean: The Unreliable Narrator.  Conrad and Ford collaborated on some projects early in their careers and they certainly continued to work together and likely worked for each other, bouncing philosophies and theories off one another.  This is maybe one of the most underappreciated literary relationships.  Did Ford and Conrad like each other?  Probably not.  Did they respect each other?  I think so.  Did they become better writers because of the works of the other writer?  Absolutely!  All of this shows up in the work of The Good Soldier, which comes to be about fifteen years after the two first collaborated in 1897.  The book is almost a cut-up style narrative, except not quite. Ford employs a narrator who speaks to the reader as if they’re sitting by the fire together, telling tales.  True to this fashion, the narrator will drop bits and pieces of his story, only to then go off on tangents and come back again, sometimes much later, to the main point – which he had distracted himself from.  He will come to “realize” things as the story unfolds, discovering meaning as he thinks about things that have already happened.  The narration is happening in the present, but the narrative is in the past.  The narrator is entirely unreliable in many ways, and yet he pays particularly close attention to time, making sure the reader can determine exactly when certain things took place (Why?  In an attempt to reaffirm his reliability and lucidity?).  It’s strange, frustrating, annoying, maddening!  But it is also shockingly innovative.

The most interesting aspect of this narrative is that the narrator itself is the primary theme!  How fun and ironic it is that a story about the nature, construction, and use (or usability) of an unreliable narrator employs an unreliable narrator, perhaps the best of them, to tell the very story.  It’s certainly a pure example of the old adage, “practice what you preach.”  The central theme of unreliability also relates to how impossible it is to tell the truth, because the question always arises: Whose truth is it?  Your truth?  Mine?  Someone else’s, whom we are speaking for?  How can we trust someone (a narrator) to accurately and effectively relay anybody else’s truth?  This is reflected in the many digressions from the main story, and in the constant undermining of Dowell’s own truth by his discoveries that what he thought at the time, which he is narrating now, turns out to be not at all what he thought, then – which changes everything he understands now (and in retrospect).  There’s also a heavy-handed motif, consistent throughout, which is the heart and its health.  The narrator is infatuated by peoples’ heart conditions, and many of the characters do seem to have weak hearts.  There is irony again, here, in that Dowell – who the reader would expect to be the most sympathetic character, turns out to be the most coldly disconnected; meanwhile, Edward and Florence, the adulterers, are always pretending to suffer from heart ailments but are, in fact, the most robustly healthy and passionate of the cast (and their vitality ultimately betrays Dowell, who is in actuality the weak/pathetic character).  Finally, there is the hero-worshiping of Edward Ashburnham, by Dowell.  This is one of the strangest characteristics of the narrative (and seems somewhat homoerotic, or at least homosocial) because Edward betrays Dowell in the worst way a friend can, but Dowell defends him throughout as one of the greatest men he’s ever known.  The question arises, though: Did Edward hope for this betrayal all along?

“Society can only exist if the normal, if the virtuous, and the slightly deceitful flourish, and if the passionate, the headstrong, and the too truthful are condemned to suicide and madness.” (253)

“Steel is a normal, hard, polished substance. But, if you put it in a hot fire it will become red, soft, and not to be handled. If you put it in a fire still more hot it will drip away. It was like that with Leonora.” (276)

“You may well ask why I write. And yet my reasons are quite many. For it is not unusual in human beings who have witnessed the sack of a city or the falling to pieces of a people to set down what they have witnessed for the benefit of unknown heirs or of generations infinitely remote; or, if you please, just to get the sight out of their heads.”  (5)

← Review: Vintage: A Ghost Story by Steve Berman (#OthersLitLGBT)
Review: Play It as It Lays by Joan Didion →

6 Comments on “Review: The Good Soldier by Ford Madox Ford”