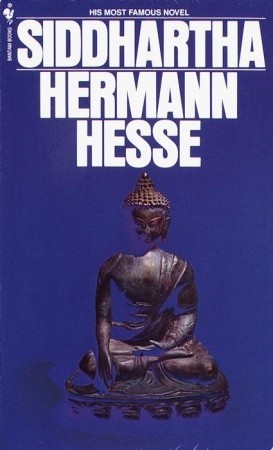 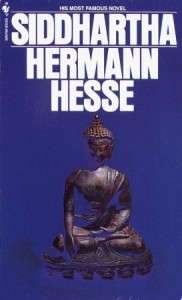 Siddhartha is the story of, well, Siddhartha. It begins when he is a young boy in India, well-liked and well-respected by his peers and elders. He is on the path to holiness, surpassing even his masters in his knowledge and spiritual awareness (much like Christ). Siddhartha “is the story of a soul’s long quest in search of the ultimate answer to the enigma of man’s role on this earth.” As Siddhartha ages, he tries different means of achieving the ultimate enlightenment, first believing he must separate himself from the world in order to find the true “Self” within – then thinking the “Self” must be destroyed or ignored before one can find peace. He meets the Buddha and, while even his closest friends become followers, Siddhartha decides that he cannot find truth and Nirvana by following anyone else’s teachings, even if those teachings seem true. The story comes full circle, and it is only when Siddhartha is an old man, having faced and succumbed to temptations of wealth, sex, and power, that he finds himself in the quiet solitude of nature and learns that, to be one’s self, one must be willing to teach himself, to learn by himself, and to chisel out a path, slowly and painfully, just for himself.

Siddhartha is the main character throughout, and he is well-developed, particularly in terms of change in the “self” over time. The story of his sacrifice is believable, as is the story of his fall to vice and lust. Perhaps the most well-flushed episode is late in the book, when Siddhartha grows old and finds the land, and the sense of self, which will allow him to reach that place of inner-peace and calm that he had been searching for, for so long. Vesudeva, the ferryman who becomes Siddhartha’s closest friend and silent mentor, is equally interesting, which is appropriate as he and Siddhartha’s paths to enlightenment will ultimately coincide. The minor characters, such as the Buddha, Siddhartha’s son (Siddhartha Jr.), and Govinda, Siddhartha’s loyal but ever-searching friend, are relatively flat but serve their purpose, which is to advance Siddhartha’s journey toward awakening.

In addition to an interesting and thought-provoking story with believable and purpose-driven characters, Hesse employs an almost mystical prose which, though modern, is reminiscent of epic poetry or biblical storytelling. His narrative descriptions and use of dialogue are well meted and poised. The language is sensual, which parallels the deep, searching premise of the story itself.

This was an interesting reading experience. The book is one which should be approached with an open mind and in a calm setting. It is not very long (my edition was 122 pages) and, while it may not be feasible for everyone to read it in a single sitting, I do recommend it – although, not if that will cause the reader to rush. This reading experience should be savored. There were moments where I felt, genuinely, that Siddhartha was a complete idiot and that Hesse’s message was becoming completely antithetical to the original premise and to my own perceptions of the soul and the meaning of life.  But then there were moments (including the Siddhartha’s final enlightenment) where I thought, “Hesse: You’ve pierced me.” This is a novel, but also a philosophy. It reminds me of Tolstoy’s Death of Ivan Ilych – a story that can be enjoyed for its literary brilliance, but also for its philosophical message, one which will resound for days, months, and years after.

“Through thought alone feelings become knowledge and are not lost, but become real and begin to mature” (30).

“This riddle, that I live, that I am one and am separated and different from everybody else . . . and about nothing in the world do I know less than about myself” (31).

“Writing is good, thinking is better. Cleverness is good, patience is better” (53).

Siddhartha is Book 8 for my Classics Club Challenge.