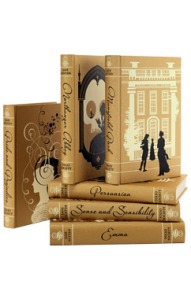 Today, I’m so excited to announce that MANSFIELD PARK has now been published, which also means the complete Austen set is now available!

Published in 1814, Mansfield Park marked a conscious departure from Austen’s previous novels. While Sense and Sensibility and Pride and Prejudice were drafted in the 1790s, Mansfield Park was composed between 1811 and 1813, when Austen was in her late thirties. The work of a practiced writer, this is Austen’s Bildungsroman: the only one of her novels to follow her heroine from a young girl into womanhood, and to trace the development of her moral consciousness.

At just ten years old, Fanny Price is sent from her poor Portsmouth home to live with the family of her wealthy uncle, Sir Thomas Bertram, in the vast grandeur of Mansfield Park. Timid and fragile, Fanny is neglected, belittled and constantly reminded of her lowly status. Her only comfort is the kindness and attention shown by her cousin Edmund, and her sole strength the sense of her own moral integrity. But this strength is tested when the alluring and sophisticated Henry and Mary Crawford arrive, and Fanny must watch her cousins – even her beloved Edmund –succumb to their seductive charms. As Lucy Worsley writes in her erudite introduction, ‘Mansfield Park is complex, mature Austen’, in which familiar themes of unrequited love and social propriety are played out against the backdrop of a nation in transition, one that – in reaction to the Napoleonic Wars and the French Revolution – is responding to ‘the great questions of the age: slavery, religion, wealth, right, wrong’.

This final volume in Folio’s celebrated Jane Austen series is illustrated by Darya Shnykina, whose beautifully textured illustrations won her the commission in the Book Illustration Competition 2017. Like Austen’s heroine, student Shnykina’s work displays a maturity beyond her years; her sensitive images convey a delicacy of atmosphere and expression entirely suited to Austen’s most subtle, discerning novel.

Special Note: I’ve just been in communication with The Folio Society, and I’ve been told that I can whisper this in your ear: Keep your eyes peeled for another visit from The Folio Society in November, during Thanksgiving Week (US). There just might be a special holiday gift available to one of my readers. (subtle, right?)

For seventy years, The Folio Society has been publishing beautiful illustrated editions of the world’s greatest books. It believes that the literary content of a book should be matched by its physical form. With specially researched images or newly commissioned illustrations, many of its editions are further enhanced with introductions written by leading figures in their fields: novelists, journalists, academics, scientists and artists. Exceptional in content and craftsmanship, and maintaining the very highest standards of fine book production, Folio Society editions last for generations.