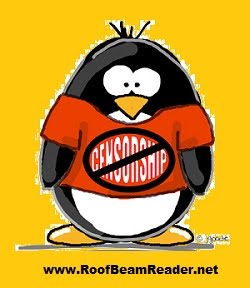 “I am mortified to be told that, in the United States of America, the sale of a book can become a subject of inquiry, and of criminal inquiry too.” – Thomas Jefferson

Hello!  And Welcome to Week 4 of my Banned Book themed weekly post, Saturday, Uncensored!  This meme is meant to bring continued and renewed attention to the dangers of censorship and banning books.

As always, I thank you all for your continued support and encouragement.  I greatly appreciate your personal stories, too!  I received comments and e-mails last week from people with first-hand experience of “encounters with the dark side” i.e. literary prejudice.  Hearing from you all keeps me motivated to continue spreading the word.  If you are interested in the theme and/or getting involved, I would highly encourage you to visit deletecensorship.org.  This fantastic website has great material on the cause, and I personally have purchased some of the anti-censorship related items, like book totes and a mouse pad.  Of course, I’m a bit of a nerd like that.  They are also partnered with one of the best resale bookstores, Half Price Books (who are also eco-conscious, another major plus!).

Now, on to the good stuff! This week, in Saturdays, Uncensored: We take a look at two classic African-American Banned Books, from two inspiring writers.

1. The Color Purple by Alice Walker

The Color Purple, written in 1982 but taking place in 1930s Georgia (for the most part) has been challenged on numerous occasions, and holds a spot on the ALA’s Top 100 Most Frequently Challenged Books of the 1990s. The book is challenged most often under the charge of “explicit content,” which is largely due to violent episodes which take place throughout the novel (often male-on-female abuse).  What I loved most about the novel was its style.  I am a sucker, I admit, for a good epistolary novel.  The letters Celie writes to God are so heartbreakingly simple and honest it is impossible not to connect with her on a human level (even though her dialect, slang, and personal story are so far removed from anything I have experienced).  My favorite part, of course, is when Celie, after being slapped by the Mayor for her impudence, smacks him right back!  How anyone could challenge such a historically significant and culturally powerful novel is beyond me but, to be fair, there are moments in this novel which, having been written so well, did make me rather uncomfortable and disgusted.

“Celie is a poor black woman whose letters tell the story of 20 years of her life, beginning at age 14 when she is being abused and raped by her father and attempting to protect her sister from the same fate, and continuing over the course of her marriage to “Mister,” a brutal man who terrorizes her. Celie eventually learns that her abusive husband has been keeping her sister’s letters from her and the rage she feels, combined with an example of love and independence provided by her close friend Shug, pushes her finally toward an awakening of her creative and loving self.” -Amazon.com Product Description

2. Their Eyes Were Watching God by Zora Neale Hurston

Zora Neale Hurston’s best known work, Their Eyes Were Watching God is, ironically, listed as one of the most often challenged novels and listed on the TIME 100 Best English-language Novels from 1923-2005.  Janie Crawford, the protagonist, begins the novel by starting to tell her life story to an old friend, recently met again – the majority of the book, then, is a flashback of Janie’s life, from childhood and up to the time Janie and her friend Pheoby meet again.  Like the epistolary form found in The Color Purple, this novel too progresses through story-telling, a common method in early and post-slavery African-American fiction.  Hurston’s prose is also similar to Walkers in its stark and unflinching realism; nothing is shied away from or hinted at – every cold reality is placed full-frontal before the reader.  This is truly effective and allows an already beautiful story to take hold of one’s attention and imagination and go wild with it.  So, why attempt to ban such an honest, moving piece?  Much of the criticism arises from Hurston’s audacity to use different dialects for her characters, including slang spelling of terms used by the characters of Caribbean and African decent (similar to Mark Twain’s Huck Finn being censored for its use of “southern slang”).  It was also challenged for “sexual explicitness” because, as we know, those who are in charge of our readings lists are often quite terrified at the thought of anyone having sex.  A personal problem, perhaps?

“Of Hurston’s fiction, Their Eyes Were Watching God is arguably the best-known and perhaps the most controversial. The novel follows the fortunes of Janie Crawford, a woman living in the black town of Eaton, Florida. Hurston sets up her characters and her locale in the first chapter, which, along with the last, acts as a framing device for the story of Janie’s life. Unlike Wright and Ralph Ellison, Hurston does not write explicitly about black people in the context of a white world–a fact that earned her scathing criticism from the social realists–but she doesn’t ignore the impact of black-white relations either.

Hurston’s use of dialect enraged other African American writers such as Wright, who accused her of pandering to white readers by giving them the black stereotypes they expected. Decades later, however, outrage has been replaced by admiration for her depictions of black life, and especially the lives of black women. In Their Eyes Were Watching God Zora Neale Hurston breathes humanity into both her men and women, and allows them to speak in their own voices.” –Alix Wilber, Amazon.com

← Junky by William S. Burroughs
Review: Harry Potter and The Goblet of Fire →