Today, I am pleased to welcome Joel Derfner, author of Lawfully Wedded Husband and Swish, to the blog!

After weeks of trying to figure out what to write my guest post about, I take Roof Beam Reader’s recent post about Arthur Conan Doyle as a sign, because I’ve been spending a lot of time talking about Conan Doyle lately with my therapist.

When Conan Doyle started writing fiction in the early 1880s while waiting for patients to start appearing at the medical practice he’d recently opened (he waited, alas, in vain), detective stories were the furthest thing from his mind; he was writing a novel about three Buddhist priests who show up to take revenge on a general who had fought in the First Afghan War. But then he came up with Sherlock Holmes, and people liked him and wanted more, so Conan Doyle gave them more, and then they wanted more, and then more, and finally Conan Doyle couldn’t take it. “I weary of his name,” he wrote in one letter to his mother; in another, “I think of slaying Holmes . . . . He takes my mind from better things,” that was to say, his historical novels. His mother wrote back, “You won’t! You can’t! You mustn’t!” but he ignored her and sent The Strand a story in which he tossed Holmes off the Reichenbach Falls, at which point twenty thousand people immediately cancelled their subscriptions.

Alas for Conan Doyle, once he got back to writing his historical fiction, which was what he was really interested in, people got back to not caring about his work, and eventually in order to keep from starving to death he had to resurrect Holmes. Circulation for The Strand immediately went up by over thirty thousand, and Conan Doyle made enough money that he could make vast, extravagant attempts to prove the validity of Spiritualism before he died of angina. 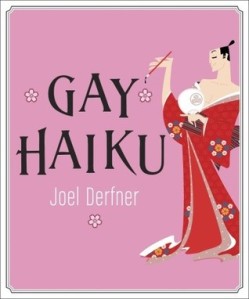 The reason I’ve been talking about this in therapy is that I’ve written three books. The first, Gay Haiku, was a cute little pink bathroom book. The second, Swish, was a memoir; on the surface it’s an exploration of gay stereotypes and the truths that can lie underneath them, but ultimately it’s a book about what it is to feel like an outsider. The third, Lawfully Wedded Husband: How My Gay Marriage Will Save the American Family, published last month, is half memoir and half musings on history, politics, and culture. I don’t really count Gay Haiku, since it took about five seconds to write, but the other two books I think of as aiming at something important about the human condition, as fulfilling what D.H. Lawrence says is the function of art:

Swish and Lawfully Wedded Husband are both attempts—whether they’re successful or not isn’t for me to say—to change the blood of their readers.

The problem is that now I’ve run out of life to memoirize, so I’m writing a murder mystery.

“My last book was about civil rights and pain and compassion,” I say to my therapist. “This book is about a dead body.”

“Really? Have you ever even picked up one of the novels Conan Doyle thought was important?”

“The point,” he says, “is that worrying about whether the work you’re doing is important or not is silly, because ultimately it’s not your judgment to make. Furthermore, it’s counterproductive, because it keeps you from engaging wholeheartedly in the work itself.”

“Can’t we just go back to talking about my mother?”

Of course my therapist is right, though I occasionally accuse him of trying to turn me into a Buddhist, and not the fun kind who would take revenge on somebody for his actions in the First Afghan War. And, to give myself some credit, I’ve started acting like he’s right too, and working on the mystery novel becomes a lot easier when I’m not hating myself for not writing something that fulfills the essential function of art. And who knows? Maybe Sherlock Holmes himself fulfills that function, showing his readers that reason and truth can triumph in a world that sets all its powers against them.

I don’t really have a clean way to wrap up this post, so I guess I’ll just say that I’m fine seeing all my other work fall by the wayside, as long as something I write changes somebody’s blood.

“Moving seamlessly from the personal to the historical to the political, Joel Derfner meditates with wit, insight and even-handedness on the realities of marriage — his and everyone’s. His story is not only deftly placed in the context of the broader fight for marriage equality, but is also a powerful tool in that fight. Mainly because it’s so funny.”

—David Javerbaum, 12-time Emmy winner (for The Daily Show with Jon Stewart) and co-author of The Last Testament of God: A Memoir

“In a culture where we disguise vulnerability with physical perfection and material success, Derfner skewers heartache with Wildean wit . . . [Derfner is] the next Noël Coward.” 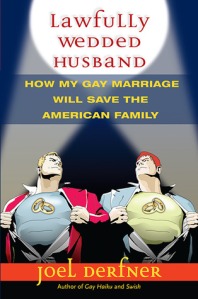 When Joel Derfner’s boyfriend proposed to him, there was nowhere in America the two could legally marry. That changed quickly, however, and before long the two were on what they expected to be a rollicking journey to married bliss. What they didn’t realize was that, along the way, they would confront not just the dilemmas every couple faces on the way to the altar—what kind of ceremony would they have? what would they wear? did they have to invite Great Aunt Sophie?—but also questions about what a relationship can and can’t do, the definition of marriage, and, ultimately, what makes a family.

Add to the mix a reality show whose director forces them to keep signing and notarizing applications for a wedding license until the cameraman gets a shot she likes; a family marriage history that includes adulterers, arms smugglers, and poisoners; and discussions of civil rights, Sophocles, racism, grammar, and homemade Ouija boards—coupled with Derfner’s gift for getting in his own way—and what results is a story not just of gay marriage and the American family but of what it means to be human.

Joel is from South Carolina, where his great-grandmother had an affair with George Gershwin. After leaving the south, he got a B.A. in linguistics from Harvard. A year after he graduated, his thesis on the Abkhaz language was shown to be completely wrong, as the word he had been translating as “who” turned out to be not a noun but a verb. Realizing that linguistics was not his métier, he moved to New York to get an M.F.A. in musical theater writing from the Tisch School of the Arts.

Musicals for which he has written the scores have been produced in London, New York, and various cities in between (going counterclockwise). In an attempt to become the gayest person ever, he joined Cheer New York, New York’s gay and lesbian cheerleading squad, but eventually he had to leave because he was too depressed. In desperation, he started knitting and teaching aerobics, though not at the same time. He hopes to come to a bad end.