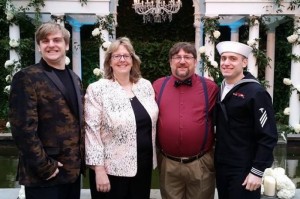 On Sunday, June 26th, 2016, my Uncle and Aunt were killed in a car accident. The sudden, unexpected, and violent nature of their passing has been most difficult to deal with. The fact that they leave behind two children, my cousin Alex, a 22-year-old who serves in the U.S. Navy, and Joe, who just celebrated his 18th birthday, makes the loss more cruel.

Given the nature of the accident, it might be very easy to cast judgment on a reckless and guilty party; but I am doing my best to turn my thoughts to happy memories of my Aunt and Uncle, and loving care for my cousins. It is more important to me that they are cared for, now, than that somebody is blamed, even if that might make me feel a bit better, and especially if they deserve the blame.

Wally (54) and Jackie (50) were two people who were impossible to forget. One meeting is all it took. They were wholly and completely alive and in love with life, which makes the fact that they are gone so incredibly confusing. How can two such vivacious, virile personalities be so suddenly extinguished?  I think about the palpable power of their personalities and wrestle with extreme cognitive dissonance: what do you mean I’ll never hear them laugh again?

To me, they were like second parents when I was growing up. My sister and I even lived with them for a time, while my parents were going through some struggles of their own. Jackie married my Uncle Wally when I was about 10 years old. It was not a happy day for me. For some reason, I took an immediate disliking to Jackie. In fact, I think most of our family did. We were a very close-knit group; we were territorial and, I think, a bit possessive of each other. I certainly felt like she was in some way stealing my Uncle from us. And her personality was so different from ours: she was blunt, direct, unapologetic. She was also confident, smart, and incredibly loving.

Jackie was the one who took me on my first college trip, when I was just 12. I was obsessed with the University of Notre Dame, so she and Wally took me and my Grandma down to the campus to visit and explore. She later somehow managed to get me a personalized message from the then-head coach of Notre Dame football, Lou Holtz. A few years later, she and Wally took me to my first “adult” concert, Shania Twain. It was a belated birthday present, and my first time going to a concert without my parents. Not long after that, when I came out to my family, Jackie immediately invited me over to their house, where she told me that I would be okay, no matter what, and that I would always have a place to go, if I ever needed it. When, years later, my partner and I moved back to Illinois from California, Jackie invited us over and welcomed Jesse with open arms. We didn’t have jobs, yet, and were living with my sister. When no one was looking, Jackie pulled me aside, stuffed a wad of cash in my pocket and whispered in my ear, “just take care of each other.”

Our personality types clashed, our political views clashed, as did our opinions on social issues.  And yet, Jackie was always there for me. She taught me how to Polka. She laughed her ass off when, during a rousing game of Scattergories, I tried to use “Pop Bees” as an insect beginning with the letter “P.” Years later, she was still teasing me about this – she never forgot. Jackie also applauded my every achievement and did her best to keep our extended family together, despite the fact that few of us made any effort at all. Despite what I always saw as a rough exterior, she cared deeply for people, especially her friends and family, and we would all learn that there was nothing she wouldn’t do or give for those who were in need.

My Uncle Wally. I think it’s fair to say there’s nobody else in the world quite like him. Like Jackie, he had a loud and boisterous – infectious – laugh. At the funeral reception, I kept waiting for him to walk through a door, laughing at something wildly inappropriate. Wherever you were in a house or room, you always knew when Wally was there, too.

Wally would show up to Christmas—imagine, late-December in Chicago—wearing nothing but boxer shorts. He took me to watch him compete in demolition derbies, rode me around on his motorcycle, and was in every way what you would expect a “manly” man to be: rough, calloused, and unafraid to belch or cuss. And he was kind. He was there for every event, large or small; when my car broke down, he would drive from any distance to help. He showed us kids how to fix anything so we wouldn’t have to pay someone else to do it. And when he hugged you, you knew he meant it.

He and Jackie would take me and my sister out of school early on the first nice day of spring so that we could grab Grandma, drive to Wisconsin and hit the lake. Wally was truly adventurous, so completely fearless and unafraid to break the rules, often only figuring out how to do something while in the act of doing it.

When I was finally tall enough to ride rollercoasters, I was still too sheepish to try. Wally was the one who convinced me to go on my first ride. When I say “convinced,” I mean he dragged me kicking and screaming onto the Batman ride at Six Flags Great America, the then-most impressive ride at the park. There was no “easing in” to situations with Wally; it was “just do it” and “do it right the first time.” So, despite my terror, I got on that ride, and I suffered through the loops and twists and turns, the high-flying dangling moments, the upside down whirls and the backwards second pass. And when I got off that ride, I got right back in line. I was hooked, the same way I became hooked on swimming after he threw me into Crystal Lake when I refused to go in myself. 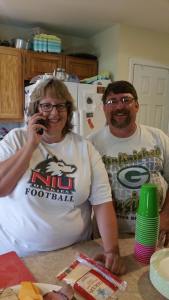 Around that same time, in another season, Wally also taught me how to ski. And when I say he “taught” me, I mean he strapped me into my boots, rode with me up the ski lift to the top of the bunny hill, pointed me in the right direction and pushed. Again, there were no instructions or directions or tips, except maybe “don’t fall down.” He was a man who embodied the spirit of carpe diem. Seize the day.

In every way that really matters, it seems, my loud, extroverted, and irreverent Aunt and Uncle were exactly the kind of people who quiet, introverted, and manners-driven me tries to be. 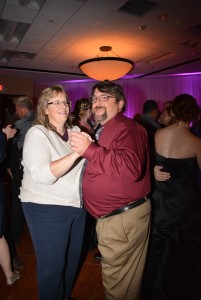 Some people come into our lives destined to shape who we ourselves will become. I suppose we don’t recognize it in the moment; maybe we’re lucky to ever recognize it at all. I’ve had a week to reflect on everything that these two people meant to me, and the many shared moments. I can count on one hand the people who have molded the direction of my life, who have acted as both inspirations and whetstones to my core values. My Uncle Wally and Aunt Jackie are in that number. I wouldn’t be who I am without the life they helped to shape for me, and I doubt I’ll be the same now that they’re gone.

“The only people for me are the mad ones, the ones who are mad to live, mad to talk, mad to be saved, desirous of everything at the same time, the ones who never yawn or say a commonplace thing but burn, burn like fabulous yellow roman candles exploding like spiders across the stars and in the middle you see the blue centerlight and everybody goes ‘Aww!’” –Jack Kerouac

25 Comments on “In piam memoriam”