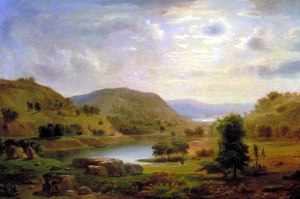 The LORD is my shepherd; I shall not want.
He maketh me to lie down in green pastures: he leadeth
me beside the still waters.
He restoreth my soul: he leadeth me in the paths of
righteousness for his name’s sake.
Yea, though I walk through the valley of the shadow of
death, I will fear no evil: for thou art with me;
thy rod and thy staff they comfort me.
Thou preparest a table before me in the presence of mine
enemies: thou anoints my head with oil;
my cup runneth over.
Surely goodness and mercy shall follow me all the days of
my life: and I will dwell in the house of the LORD
for ever.

For believers and non-believers alike, one thing that can surely be agreed on by all is that the Bible as literary text and historical artifact is immensely significant. How can one presume to study western literature or culture without being familiar with one of its most influential foundational tomes? Even Gutenberg chose the Bible as the first book to be printed on his printing press.

Although this psalm is not my favorite passage in the Bible (there are many others I prefer, from the “Sermon on the Mount” to “The Christmas Story;” from Jonah to Jonathan and David; and of course the entire book of Revelations, which has inspired others, like William Blake, to a kind of maddening brilliance); nevertheless, I chose this passage in particular because it is one of the most familiar. Any child who grows up in an even remotely Christian environment will have heard and/or memorized this piece at some point. We read it in works of fiction, we watch as characters on television and in movies recite it. It’s nearly ubiquitous.

Many historians believe that this psalm was written by King David. I don’t have any evidence to the contrary, though I remain skeptical. The penchant for crediting aristocratic and royal figures with creative works, without evidence, has been widely noted (consider the controversies surrounding the “real” Shakespeare and the arguments that it was actually someone like Edward de Vere the Earl of Oxford or Sir Francis Bacon — someone titled– who must have done the work, because a “commoner” could never have accomplished such genius).

Authorship aside, the psalm itself is a great example of the early pastoral, which was popular in much of classical literature, including Greek, Latin, and Germanic traditions, among others. Jesus as Shepherd would of course fit into that idealized, Arcadian vision. The contrast between the first lines of calm purity and the middle section which forebodes danger and death is quite the juxtaposition. The technique aids memorization, but it also creates a heightened pathos which is difficult to remain indifferent toward. Of course, the ending ultimately finds the Shepherd leading us, his lambs, through that danger and not simply into the green pastures, but onward to a place of permanent, never-ending peace and harmony. Religion aside, it is masterful poetics.