Please welcome Brianna from The Book Bug Reviews, with a guest post about the major themes in Persuasion. Be sure to read through to the end for a special giveaway (open only to Austen in August participants)!

Austen in August: The Top 3 Themes of Persuasion

I am so excited to be doing a guest post for Austen in August! Jane Austen was the first classical author I ever read and she happens to be one of my favorite authors ever! So when the opportunity to read Persuasion presented itself I couldn’t refuse.

There are so many amazing themes to Persuasion that I could discuss, but I have decided to highlight three of them that really stuck out to me.

First: A character’s reaction to loss reveals their true self.

Jane Austen uses loss as a way to build her characters. She reveals who they really are by putting them through painful situations. I happen to love this approach to writing. My philosophy when creating characters is if you want to see what a character is really like, break them and put them back together. But don’t take my word for it. Let me show you how the expert does it.

Loss reveals the true underlying aspect of someone’s character. Are they considerate, selfish, vain, tender, foolish, or kind? Austen expertly builds a diverse cast through the repeated experiences of loss.

Second: Is it better to be easily persuaded or to stand firm in one’s opinion?
The title of the novel is Persuasion and thus it is one of the major themes of the book. Austen doesn’t come out and say exactly what she thinks about this but gently provides examples of the benefits and limitations of being persuaded or standing firm.

Easily Persuaded
Pro: Mary is easily persuaded out of her negative assertions about herself. This means that when she has talked herself into a miserable state Anne can help her see happiness in her life and to be thankful for all of life’s blessings.

Con: Anne is persuaded by her family and by her dear friend Lady Russel to give up her engagement to Captain Wentworth, who she deeply loves. The result is seven years of regret and misery.

Not Easily Persuaded
Pro: Anne is not able to be duped by Mr. Elliot when he tries to pressure her into marrying him. She is able to stand firm in her decision, despite there being some strong enticements such as taking her mother’s place as Lady Elliot, saving her ancestral home, and gaining a large fortune.

Con: Louisa refuses to be persuaded by anyone so when she foolishly jumps off a ledge she nearly dies. The extent of her injuries change her life forever. She no longer has the vibrant energy she once had and as such much relinquish much of her active life-style.

Perhaps Austen’s point is not that one should be firmly camped on either side, but that one should use good judgement for all circumstances. Take wise counsel but do what you believe to be best.

Third: Class mobility.
In Austen’s day, class hierarchy was clearly defined. There was royalty, nobility, the middle class, and the lower class. Each individual knew where they belonged in the social organization and in general a person didn’t move up or down on the ladder. If you were born in the lower class that is where you stayed.

Sir Walter Elliot, Anne’s father, firmly believes that one cannot change his social standing, and uses this reasoning as a firm rejection of Anne’s betrothed. If you are in the elite social class then you must stay with your own people or risk tarnishing yourself, family, fortune ect. But despite Sir Walter having the highest rank in his county, he is also the most foolish man. He spends beyond his means, driving his family into debt and out of their ancestral home. 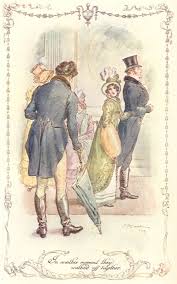 Enter Admiral Croft. The Admiral embodies Sir Walter’s worst fear. He is a man who has earned his own fortune rather than inherit it and Sir Walter believes that he is a man of barbaric taste and appearance, because that’s how all sailors are supposed to be. But when Anne finally meets the Admiral she is shocked to find that he is in fact, in possession of better manners than her vain father. Furthermore, he is responsible with his finances and seeks to improve the Elliot’s estate while he is their tenant. Admiral Croft is in every respect a better man than Sir Walter Elliot, and lacks only the official title to be able to lay claim to the social status of gentry.

Austen’s ideas about social class, may at first seem to have no relevance to today, but that would be an oversight. Today’s social classes may not be as clearly defined, but if there is still a hierarchy. Depending on your race, economic standing, education, and sex you may have more or less mobility and access to resources in today’s society. Austen reveals that those who believe they are entitled to a certain status in society often do not deserve it at all, and even though someone may not at first appear to fit the mold, if you have the skills you can move through any hierarchy and should be allowed to do so.

Conclusion
Jane Austen was a brilliant woman who used the guise of a romance to explore ideas of loss, persuasion, and class mobility. Thank you to Adam at Roof Bean Reader for allowing me to guest post. I am honored to have gotten to share my ideas about Austen’s work.

What other themes stood out to you? Post it in the comments! We would love to hear from you! 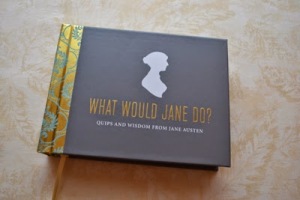 Giveaway: One copy of What Would Jane Do?: Quips and Wisdom from Jane Austen

To be considered: Winner must have commented on the master post for the event by August 7th, stating their intention to participate in Austen in August. To be entered in this giveaway, leave a comment on this post, sharing something about your love/appreciation/whatever for Jane Austen. Why are you here?? 🙂

7 Comments on “Themes of Persuasion #AustenInAugustRBR”