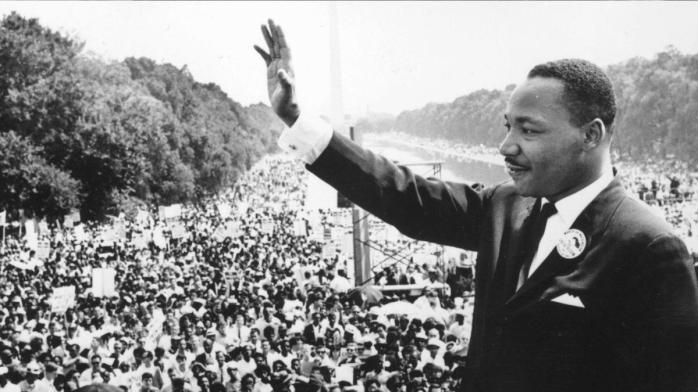 Today is my birthday, and I spent the early part of the morning reflecting briefly on my life: friendships, accomplishments, goals, marriage, and family. But I’ve also been thinking a lot this morning about the legacy of Dr. Martin Luther King, Jr. It was fifty years ago today–April 3rd, 1968–that he delivered his final sermon at Mason Temple in Memphis, Tennessee.

The opportunity must have seemed both ideal and disconcerting to King, who had spent so many years tirelessly marching forward in the struggle for racial equality in the United States, only to see so little progress. At this point in his life and career, the attention of major news outlets had turned away from his leadership, which must have seemed stalled, in favor of reporting on the more dramatic activities of the black power movement, which was also doing good work and heavy lifting, but in a more obvious way (and as we know, the media loves spectacle).

So, King had turned his attentions to issues of poverty and to supporting the poor and working classes in America. For this reason, I think being invited down to Memphis to speak to the Sanitation Workers in support of their strike for fairer wages and work conditions, must have been promising. But King had another relationship with the city of Memphis, and he surely knew it would not—or could not—be another Selma. Still, he went and, apparently without notes, delivered one of his most powerful, memorable, and moving sermons. The one that would be his last.

A storm raging outside, thunder and lightning crashing in the background, and rain pummeling the tin roof, set a kind of wild and natural rhythm. King stepped up to the podium and addressed a sea of people who had been calling his name: “The nation is sick,” he said. “Trouble is in the land. Confusion all around.” I can only imagine the feeling in the room right then. Here came a group of workers looking for support and leadership and encouragement from one of the world’s greatest inspirational orators, and this is how he begins?

But I know, somehow, that only when it is dark enough, can you see the stars.

But King seemed to know that all of these American problems were related. The struggle for racial equality and worker’s rights. The struggle against poverty and the struggle for peace. Vietnam continued on, and more and more young people died for reasons that were muddy at best. The rich and powerful got richer and more powerful on the backs of laborers and with the help of investments in the military industrial complex. And segregation and its legacy were still pressing issues. Still, King looked at all of this and remarked that he was happy to live in this time, because “we have been forced to a point where we’re going to have to grapple with the problems that men have been trying to grapple with through history, but the demand didn’t force them to do it.” He believed that the time was now, that it was “no longer a choice between violence and nonviolence in this world; it’s nonviolence or nonexistence.” He was throwing down the gauntlet.

I look at the world around us today, at the rise in racist and homophobic and anti-Semitic, and transphobic hate crimes, and I wonder, did Dr. King think we would have come together by now? Solved this by now? And why haven’t we? And where is our Dr. King these days? I think about how Dr. King, in that last sermon, chastised the press for only dealing with surface issues and consider what that means today, in this new age of for-profit news driven by monopolies like the Sinclair group which orders its 200 affiliates around the country to read a script about “false news” on the very news stations so many people watch, and trust, because it is their local station.

I look at the world around us today, at our declining status in the international community; at our collective disdain for facts and education; at the anti-intellectualism that folks like Stephen Hawking have been warning us about; and at the bridges, real and figurative, we have been building around our own little bubbles to insulate us, with the help of social media algorithms that keep us locked into our tunnel vision, and I wonder when, or if, we will ever be able to come together and see and think and feel as a people again.

It seems to take more and more effort to be positive today. But even in his last and perhaps most painful speech, Dr. King looked up and forward:

Well, I don’t know what will happen now. We’ve got some difficult days ahead. But it doesn’t matter with me now. Because I’ve been to the mountaintop. And I don’t mind. Like anybody, I would like to live a long life. Longevity has its place. But I’m not concerned about that now. I just want to do God’s will. And He’s allowed me to go up to the mountain. And I’ve looked over. And I’ve seen the Promised Land. I may not get there with you. But I want you to know tonight, that we, as a people, will get to the Promised Land. And I’m happy, tonight. I’m not worried about anything. I’m not fearing any man.

The very next day, Dr. King was assassinated outside his hotel room in Memphis. There couldn’t be a more startling juxtaposition of hope and despair. Who could continue to march forward when the very voice of faith had been extinguished?

Except, it hasn’t been. We still remember that voice and look to that voice today. And when I ask myself, where is our Dr. King, I have to admit that I’ve been blind. I’ve been taken in by Twitter-storms and negative media reinforcement and “fake news”, and I have overlooked the people.

I look now and see the men and women marching for women’s rights.

I look now and see the teachers marching for their students’ rights.

I look now and see the students marching for their lives.

I look now and see that “in the eyes of the hungry there is a growing wrath. In the souls of the people the grapes of wrath are filling and growing heavy, growing heavy for the vintage” (Steinbeck, The Grapes of Wrath).

So, on my birthday this year, I have just one wish. Perhaps we can all be a little bit more like Dr. King. Despite our fears and doubts and despairs, perhaps we can look to that Promised Land. Perhaps we can open our eyes and our hearts and our minds and our ears; we can listen to each other and look to each other again, not through these arbitrary lenses shaped by ideological forces outside ourselves, but with our own vision. And perhaps we can accept and applaud and champion the voice of Dr. King that still resonates through our youth, the new leaders of our day.

I see and I hear 11-year-old Naomi Wadler, who stood in front of a crowd of 800,000 people to say, “I am here to acknowledge the African American girls whose stories do not make the front pages of every national newspaper, whose stories don’t lead on the evening news.”

I see and I hear 18-year-old David Hogg when he says, “The cold grasp of corruption shackles the District of Columbia. The winter is over. Change is here. The sun shines on a new day, and the day is ours.” And I believe him.

I see and I hear Edna Chavez when she cries, “It was a day like any other day. Sunset going down on South Central. You hear pops, thinking they’re fireworks. They weren’t pops. You see the melanin on your brother’s skin go gray. Ricardo was his name. Can you all say it with me?” And I say it: Ricardo.

I see and I hear Emma Gonzalez’s silence, and I respect it.

We’ve got to give ourselves to this struggle until the end. Nothing would be more tragic than to stop at this point . . . [w]e’ve got to see it through.

There is a future. That future is always to be determined. My wish this year is that our future will be shaped by the rejection of fear, the embracing of love, and a new determination to succeed together in this great human experiment.