Considering the Secret of Northanger Abbey 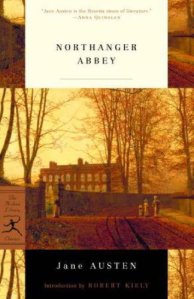 Although I’m not hosting Austen in August this year, I did want to dip my toes into something Austen-related, at least. Old habits die heard! As many of you know, my favorite Austen novel is Northanger Abbey. It is not her best, but I have a special affinity for it, for a few reasons. I recently read an article that takes a different view on its characters, so I thought I would consider it and respond here.

Edward Neill’s “The Secret of Northanger Abbey”is largely a critique on the “imbecility” of the characters in Jane Austen’s novel. Neill refers to each character individually, pointing out their less admirable traits, without paying much attention to what positivity or sensibility the characters might actually bring to the story. The article revolves around negativity, and does not take into consideration multiple-motives or interpretations.

For instance, when discussing an argument between Catherine and Henry Tilney, over Fred Tilney’s actions with Isabella Thorpe, Neill writes, “Catherine’s condemnation of [Fred’s] caddishness seems more accurate than Henry’s blustering indulgence” (Neill 23). However, Neill only allows for Catherine’s behavior as proper in this circumstance, refusing to acknowledge the fact that Henry must first (especially in the time this novel is written, when familial ties are of the utmost importance) align himself with his brother; furthermore, if we look at the novel itself, it is clear that Henry Tilney understands Isabella’s character, as well as his brothers, and he finds them both equally at fault. Henry touches on this sentiment when he responds to Catherine’s one-sided assault against his brother, essentially stating that, in order for one to fret over Captain Tilney’s treatment of Isabella, one would need “first suppose Isabella to have had a heart to lose, – consequently to have been a very different creature; and in that case, she would have met with very different treatment” (Austen 150-51). Thus, Henry does not disagree that the Captain’s behavior leaves much to be desired, but also that one such as Isabella need not expect, nor deserve, any better.

The character “flaws,” as Neill understands them, are not the only aspects of Austen’s novel with which Neill finds fault. He goes on to examine Catherine’s growth as a character, and rather than applauding Austen for allowing Catherine to develop over the course of the narrative, Neill states that the character growth from “imbecility sprouts at an alarming” rate (Neill 24). I would argue, however, the old adage that one cannot truly grow, or appreciate one’s own self-worth, without first making mistakes (or, “it is better to learn from your mistakes, than to be doomed to repeat them.”) Why does Neill find such fault in a character’s ability to learn and to grow – as Catherine does – with each new experience? It is also clear that her most important life experience to-date is happening at this moment in narrative time, when Catherine is visiting Bath and largely responsible for herself for the first time, so it seems natural that this is a time when she would obtain a great deal of self-awareness (as well as social, political, economic, etc.), even rapidly.

The third issue I take with Neill’s reading of Northanger Abbey comes by way of his deconstruction of an interaction between Catherine and Henry. As the two characters discuss their reading of The Mysteries of Udolpho, Neill labels Henry’s irony “self-reproachful,” then goes on to state that Catherine misunderstands Henry’s intention with his statement that he has read the book and thus, must “gain points” with her (Neill 25). Neill seems to think that Henry is mocking her, and, though Tilney does use sarcasm often enough to get his point across, as when he says, in jest, that “nature has given [women] so much, that they never find it necessary to use more than half,” it is also made clear, early in the story, that he does read and enjoy novels (Austen 79). Therefore, I would argue, this scene is not meant to diminish Henry’s nor Catherine’s character; instead, it is Austen’s way of bringing the general popularity and importance of the novel to the forefront.

Neill’s essay is an interesting piece of criticism, and it does have its value. It offers one way of reading the characters in the novel and leaves room for argument and further consideration. Further, it concludes that “Northanger Abbey contains the meaning of Northanger Abbey” which Catherine, mostly by accident, discovers (Neill 29). The article opened up my own reading of the text by making me look more closely at the way Catherine’s character develops throughout the novel, and how it is her stumbling and misinterpretations of situations, or perhaps more generously, her intuition which allows her to become the true heroine of the novel. What does it mean, for instance, that “not only is she not absolutely wrong, she ends by seeming closer to being right than anyone else?” (Neill 28) Neill is correct that Catherine somehow interprets the natures of John Thorpe, General Tilney, and Captain Tilney; however, I would have to argue that, even though she does not, at first, understand the reason for her “gut feelings” about these people, she is the only person to recognize that there is something wrong. Thus, in my opinion, Catherine is no “imbecile.”

← The Dystopic Villainy of Book Clubs
“Joansing” for Didion →

8 Comments on “Considering the Secret of Northanger Abbey”