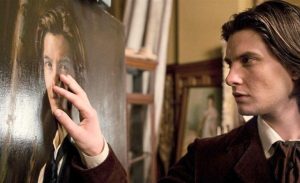 Two weeks ago, I introduced a five-part project exploring Oscar Wilde’s masterpiece, The Picture of Dorian Gray, as viewed through various critical lenses. I began in Part 1 with Formalism and then considered the opposite perspective, Reader-Response theory. This week, I return to a more textual consideration as opposed to an audience-focused one.

The post-structuralists are most likely to be fascinated by the idea I put forth in part one of this series; that, perhaps, Oscar Wilde was both presenting himself to the public and, at the same time, chastising himself for doing so; it is the idea Jacques Derrida presents in his essay “Plato’s Pharmacy” and what he might call “remedy and drug” (Leitch 1837). Derrida writes, “a text is not a text unless it hides from the first comer, from the first glance, the law of its composition and the rules of its game. A text remains, moreover, forever imperceptible” (1830). The discussions, then, of whether Oscar Wilde was being autobiographical or not; of whether Dorian Gray were a real person or not; of whether Sybil Vane represents Wilde’s wife or not, would be of great interested to the deconstructionists because they are all unanswerable and ever-changing, they are all “play.”

If it is the case that Wilde knows what he is doing by “[calling] into account the overly self-conscious artist who projects his own personality too severely on the public” only to then “put too much of [himself] into it, would be of great interest and amusement to Derrida and the deconstructionalists [sic] (Baker 350, 352). Similarly interested would be Baudrillard, for two reasons: the presence of a portrait in the story, one which becomes the reality, leaving the person a “simulacrum” and the projection of Wilde onto his own work, confusing reality and fiction. Baudrillard argues that copies and reproductions become more desirable than the original, that they “provide all the signs of the real and short-circuit all its vicissitudes” (Leitch 1733). This is certainly true of the painting of Dorian Gray; “the hideous corruption of his soul” is demonstrated by the changing face of the copy in the portrait, rather than on Dorian’s own visage (Wilde 104). As for Wilde’s projection of self onto the pages of his novel, Baudrillard would find this another means of copying real life and making it more interesting, more accessible, and more desirable than the life itself. Why bother living a life, with all its bothersome detours and “vicissitudes” when one can sit back and read a life, one carefully directed and presented?

Another post-structuralist who must be noted, and whose theory need be applied to Dorian Gray is Michel Foucault. In The History of Sexuality, he writes of “a policing of sex: that is, not the rigor of a taboo, but the necessity of regulating sex through useful and public discourses” (Leitch 1652). That the sexuality of Dorian Gray and indeed Oscar Wilde was policed, is indisputable. Wilde was sentenced to solitary confinement for his “acts of sodomy.” Foucault would offer that this had to happen. In order for homosexuality to be talked about, it was necessary for it to be publicly punished and, consequently, shoved into the spotlight:  “Wilde was arrested in April 1895 and from that moment a sheer panic prevailed over all questions of sex, and especially of course questions of the Intermediate Sex” (Schmidgall 229). Oscar Wilde’s sacrifice, though not intentional, allowed for debates to be fueled and discussions to be brought about. Then, incrementally, the act of talking about homosexuality allowed for the inclusion of it in new texts.