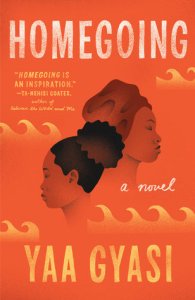 I started reading Homegoing sometime around September of 2019. I just finished it on January 20th, 2020. Four months to read a contemporary fiction novel of 300 pages. That’s a little absurd for me, to be honest, and I’m not sure what took me so long. I could blame it on work, on writing, on other responsibilities, or on the fact that for the last 6 months I’ve been reading 4 or 5 books at a time, constantly (a terrible error I’m now trying desperately to correct! I’m down to just THREE books right now!). Anyway, it took too long, but boy was it worth the time.

It’s hard to describe Yaa Gyasi’s first novel and even harder to believe that it is her first. In many ways, I could compare it to Colson Whitehead’s The Underground Railroad, except that I prefer Homegoing. I’m tempted to say, “this is a masterpiece of contemporary literary fiction that deals with the deeply complex history of race in the United States, beginning with the African slave trade and commenting right up until the present,” and leave it at that. But that wouldn’t do the storytelling much justice. It’s true that this novel covers hundreds of years, though it focuses on two lines of ancestry beginning with two half-sisters living in what is now Ghana. One line remains in Africa, having participated in the slave trade, and the other line is made up of descendants of a woman stolen from her tribe, enslaved, and brought to the United States.

Beginning with the tragic relationship between slaver and enslaved, the novel then progresses slowly and methodically forward, chapter by chapter, with each new chapter focusing on one descendant from one or the other of these lines, alternating between the African slavers and the African enslaved. Ultimately, as the generations progress, these two family lines come closer and closer together until, at last, the two contemporary living members of both lines are reunited and they, like fire and water, stand both in stark contrast to each other and in necessary complement.

I’m not sure I’ve ever used this phrase before, but it seems fair and just to say: this novel is a tour-de-force. Not only is it beautifully written and incredibly imagined, but it is also masterfully balanced. The complexity of telling a historical narrative and weaving together two story-lines that diverge and then slowly re-converge after centuries apart is difficult to overstate. It takes a delicate hand and brilliant imagination to make this work, but work it does. The painful history is treated fairly and without reservation. The many types, shapes, and forms of racism and all its variety of implications for those impacted by it since the original sin of slavery is posed in breathtaking sweep and yet, in the most human and relatable ways. From the original capture of native people, to the American Civil War; from Jim Crow to the Harlem Renaissance; from the Civil Rights movement of the 1960s to the continued reckoning of today, Yaa Gyasi’s scope is wide and encompassing.

If you’ve ever tried to wrap your head around institutional racism but get lost in theory or technicalities, Homegoing is a wonderful opportunity. It is, first, a beautiful and painful story about people; but it is also the creative articulation of the complicated web of a shameful shared legacy of racism in the United States. It has the potential to open even those eyes that have been intentionally kept closed to these persistent realities.

← The Good Earth
Angels in America →

10 Comments on “Homegoing by Yaa Gyasi”