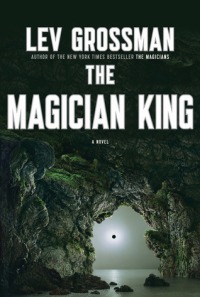 The Magician King by Lev Grossman

The Magician King is the sequel to Grossman’s 2009 novel, The Magicians (my review can be found here). Quentin Coldwater and the other genius-magicians are back to save the world(s) again, only this time Quentin is forewarned that, part of accepting a quest and winning it is sacrificing or losing something most dear to him.  And this time, he not only battles magicians and monsters, but must take on the creators of all life, all worlds, and all universes:  the gods.  In the first book, Quentin loses someone very close to him and that pain has stayed with him over the intervening years; so, what more could Quentin have to lose?  As it turns out, quite a lot, although he doesn’t realize it yet.  In this second installment of the lives of these realistic magicians, the reader gains perspective on more than just Quentin’s struggles.  Julia, a recurring character from the first book, has a front and center role here, and her story is a dark and dangerous one.  The quests that Quentin and Julia are on ultimately lead to the same place, though the majority of each is played out in different worlds (Fillory and Earth).  Only when they come together are they able to make headway toward finding the Seven Golden Keys and to avoid a catastrophic event, the return of the gods, which will doom all worlds to the loss of magic forever.

The Magician King reintroduces us to some of our favorite (and least favorite) characters from The Magicians.  The four monarchs of Fillory – Quentin, Eliot, Julia, and Janet, have been ruling the land since their defeat of Fillory’s previous dictators and restoring balance to the realm.  Josh, another magician from the genius school Brakebills, reappears and helps the others on their quest to save the worlds.  Aside from Janet, who does not get much page time, and Eliot, who has minimal growth near the end, most of the recurring characters grow quite a bit over the course of the story, and are noticeably different from the personalities of The Magicians.  Some of the new characters, too, like Poppy – a brilliant Australian research magician, who is studying dragon lore, and the secret society of magicians who Julia manages to engage with, after years of strenuous study and training, add great depth and new life to this second book in the would-be series (as I do anticipate at least one more book).  The great disappointments, though, are the final resolutions for Quentin and Julia, the book’s main characters.  Each ending seemed relatively unsatisfying – Quentin seems to have learned something at the end, but he’s not quite sure what.  Julia becomes more than human, which we are led to believe is what she deserves for all her sacrifice, except that her sacrifice always seems selfish and, if anything, makes her less worthy (at least in this reader’s opinion).

Grossman certainly has a unique voice, particularly within the fantasy genre.  His Magicians books are much more realistic than one would expect fantasy novels to be, and this includes the language.  The magicians speak in real voices – they are vulgar, colloquial, and sarcastic.  They are, aside from their magical abilities and supposed genius (a lingering point of contention for me, from the first book), very normal people.  This may be difficult for a lot of readers, particular those who pick-up these books expecting a typical fantasy story.  Reading Grossman’s fantasies is much more like reading Irving or Updike, with magical/fantasy elements, than reading J.R.R. Tolkien or C.S. Lewis (though both authors’ works, in addition to works by Rowling and other fantasy writers are referenced many times, in a tongue-in-cheek manner).  This could be a pro or a con, depending on what individual readers want from their fantasy novels.  Still, Grossman’s language is fluid and engaging; the story moves forward at a steady but sometimes disjointed pace and, aside from a few proofreading errors, which I only blame an author for when he/she is self-publishes, the style is well-done and appropriate.

What I love most about this book is what I worry others may not enjoy: the realism.  It could be very difficult for fantasy lovers to enjoy this take on fantasy.  It almost comes across as satire, at times.  Many reviews of The Magicians, for instance, took issue with that book because they believed it either stole from or made fun of traditional fantasy books, and the genre in general.  I will say of The Magician King what I said of its predecessor:  Grossman does what he intends to do, which is pay homage to the fantasy genre and its giant writers, while making the genre his own.  This is a difficult thing to do, but I believe Grossman does it well and should be applauded for his efforts. I would caution sensitive readers to be prepared for some disturbing scenes.  I read subversive literature often, William S. Burroughs and Dennis Cooper being two of my favorite writers, but there was one particular passage in The Magician King which made even me a bit squeamish.  Still, if you are looking for a truly different, envelope-pushing, dangerously real-life kind of fantasy, The Magician King (and its predecessor) is for you.

← Review: The Library of Shadows by Mikkel Birkegaard
The Left Behind Ones →

5 Comments on “Review: The Magician King by Lev Grossman”