Review: Every You, Every Me by David Levithan 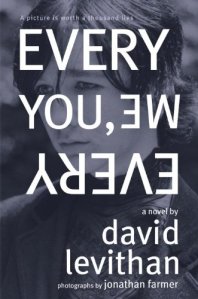 Every You, Every Me by David Levithan

I can say it now: I hate David Levithan, unequivocally.  Why do I hate him?  Because he continues to write every book I would have written, had I the talent, stamina, or patience to actually become a writer.  First, there was Boy Meets Boy, a beautiful high school romance between two teenage boys, delivered in the most natural way I have ever seen.  Then, there was Will Grayson, Will Grayson, which he co-wrote with John Green and which was, let’s face it, a match made in heaven.  Most recently, he released The Lover’s Dictionary, which is one of the most interesting and relevant re-imaginings of the adult love story in current fiction.  So, alright, I actually love David Levithan.  With his latest, Every You, Every Me, David Levithan again cooperates with another artist, this time a photographer named Jonathan Farmer.  The main character, Evan, recently lost a friend – the one friend he wished could have been much more than a friend.  He and Ariel’s (that’s “the one”) boyfriend, Jack, are struggling in their own ways to deal with their grief and feelings of responsibility about what happened to Ariel.  Suddenly, as Ariel’s birthday approaches, Evan –and Jack- start to receive random, cryptic photographs in places which remind them of Ariel.  Some of the photos even have Ariel in them.  As the torture continues, Evan struggles to fight the madness and find the person responsible for leaving these photos – but who is it?  Could Ariel herself be somehow haunting them?  Is it a mysterious stranger with a grudge brought to bear?  Or, could Evan himself have truly snapped and not even know it?  Thrilling, poignant, and surprising – David Levithan has definitely done it again.

As is the case with most of Levithan’s work, the book is rather sparsely written.  That is to say, the story tells itself, in a way, and is much more the focal point than its characters are.  For this reason, the characters do not get as much growth, development, or characterization as one might hope.  Still, the various personalities – particular of Evan and Jack, but also of some of the minor characters- are clearly written so that each character is identifiable as him or herself.  What is most impressive in this regard, though, is the characterization of Ariel, the dangerously disturbed girl who Jack and Evan are pining over, and who is long-gone before the story even begins.  To develop a character that is so crucial to the story, yet not technically a presence in it, takes a certain amount of craft – and Levithan has it.

What I am often most impressed with is Levithan’s story-telling ability.  His prose is sparse but engaging – not lofty in the least, but also not quite conversational.  There is an interesting balance between these two extremes which Levithan always manages to scale delicately, and Every You, Every Me is no exception. The interposing of images at crucial moments of the story, coupled with the “chapter parts” and the varying lengths (sometimes a chapter part is one or two sentences, other times it is a few pages) adds an interesting complexity and novelty to the structure.  There is also quite a lot of strikethrough in the prose, as if the narrator, Evan, is arguing with himself as the story progresses – fighting certain memories, battling certain emotions.  At first, the strikethrough was a bit irritating, because I wasn’t quite sure whether I should skip or scan through that and read just the open prose, or if the strikethrough itself was really part of the storytelling.  This is a determination each reader will have to make on his own, as it works either way; for me, it felt most appropriate to read every word because the struggle for the character, being mirrored in the prose was ultimately moving and important.

To live or to die.  That is a decision every person makes every day, though hardly any of us think about it.  Still, the choice is ours, really – we wake up each day and we decide, consciously or subconsciously, whether or not to continue living.  This is a very personal, private thing, and for most, not really a consideration at all.  So, what if someone else forced that decision – of whether they would continue to live or not- on you?  What if they put you in command of their survival?  Could you let someone –a best friend, a girlfriend- die, if they really wanted to die?  Would you force them to get psychiatric help against their will if it meant they would live – but live hating you forever?  This is the nature of Every You, Every Me.  The title is taken from a moment in the book when Ariel is telling Evan that all of us have multiple personalities, in a way.  We don’t ever show 100% of ourselves to anyone else and, likewise, we never see that 100% in another.  Sometimes, we can’t even admit all of the truths about ourselves to ourselves.  What is so wonderful about each of Levithan’s books is that they say something, and usually it is something few others know how to say or how to admit.  Every You, Every Me is a story about love and friendship, yes, but more importantly it is about struggles with depression, social anxiety, psychotic breaks, and decisions none of us should ever have to make.  It is about how to survive and move on, when all is said and done.

← Review: This Side of Paradise by F. Scott Fitzgerald
Review: The Night Circus by Erin Morgenstern (With Bookalicious Pam) →

7 Comments on “Review: Every You, Every Me by David Levithan”