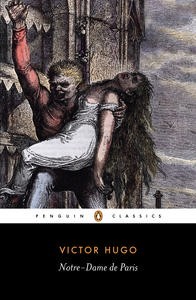 Count Frollo, Quasimodo, and Esmeralda are quite possibly the most twisted, most bizarre, and most unexpected love-triangle in literary history.  And if their problematic involvement with one another is not enough, throw-in Esmeralda’s philosopher husband, Pierre, and her unrequited love-interest, Phoebus, not to mention the self-isolated mother-in-mourning with a sad history of her own, and Frollo’s younger, troublemaking brother Jehan, and finally the various kings, burgesses, students, and thieves, and suddenly we have an epic history in the making.  The main character, as it turns out, is not Quasimodo or Esmeralda, but Notre-Dame itself.  Almost all of the major scenes in the novel, with a few exceptions (such as Pierre’s presence at the Bastille), take place at or in view of/reference to the great cathedral.  Hugo’s primary purpose is not to present the reader with a heart-rending love story (or two), nor is it necessarily to comment on social and political systems of the time (though this is certainly a high purpose); the main purpose, though, is a nostalgic view of a diminishing Paris, one which puts its architecture and architectural history in the forefront and which laments the loss of that high art.  Hugo is clearly concerned with the public’s lack of commitment toward preserving the rich architectural and artistic history of Paris, and this purpose comes across directly, in chapters about the architecture specifically, and indirectly, through the narrative itself.

Hugo is concerned with one character above all in this story, and that is the cathedral.  While other characters have interesting backgrounds and do develop slightly over the course of the story, none seem truly round.  This is a minor point of contention, because though the story may have a loftier sociological and artistic purpose, it loses something by not also working completely as a stand-alone narrative.  One can certainly empathize with Quasimodo’s dilemma, for instance, when he finds himself caught between the two loves of his life, Count Frollo and Esmeralda.  The sub-story relating to the mourning woman who has locked herself in a cell, weeping over a child’s shoe (and who vehemently despises the gypsies for stealing her daughter) is also moving, but ultimately unsurprising.  Count Frollo’s descent from learned man and upstanding caregiver is not entirely unbelievable (given, especially, the relationship between Frollo and his brother), but it still seems sudden and quite dramatic.  Of course, this suits the Gothic element of the story nicely and also parallels Hugo’s analysis of science versus religion & physical art versus linguistic, so it is not out of place – yet the characters seem flat in relation to the overall attempt by Hugo to re-instill, through means of Romanticism, a renewed passion for the Gothic era. In the end, the characters and there interactions are interesting and, at times, moving or hilarious.  The reader can engage with and, to a certain extent, believe them, but they are not perfect characters; this is in large part due to the fact that their stories are not the primary focus of the work.

What moves this story along so well, even through chapters such as “A Bird’s Eye View of Paris,” which is, literally, a textualized description of the city of Paris, if looking at it from on high, and in all directions, is Hugo’s great ability at crafting words – phrases – sentences.  Although I found this story inferior to Les Miserables, which is perhaps to be expected, considering it was published 30 years prior and much of it was written under a pressing deadline, one thing the two clearly have in common is a richly beautiful and workable prose.  There were certain other “tells” of inexperience, such as Hugo’s confusing dates/places or allowing certain items to exist in the time of the story that were not yet invented (the story takes place nearly 400 years before Hugo wrote it).  Still, the language and prose are clearly masterful, almost umatched.  Hugo’s sense of humor (especially sarcasm and irony) are very well developed and leap across the page.  His Gothic elements are appropriately dark, even surprisingly so at times.

What is most interesting about Hugo’s Notre-Dame de Paris is that everyone knows the story, but few really know the story.  There have been numerous adaptations of this work, for film, theater, television, etc.  Most people are probably familiar with the story through various retellings in children’s books or movies (i.e. Disney’s The Hunchback of Notre Dame).  Those of us who are only familiar with this story as told through the grapevine are led to believe that it is a tragic “Beauty and the Beast” type love-story, where true love rules in the end.  This explanation of the tale could not be farther from the truth. Notre-Dame de Paris is first and foremost a story about art – mainly, architecture.  It is a romanticizing of the Gothic period and a study of the time period which brought together traditional art forms and oratory with the novel idea of a printing press (and published works as artistic/statement pieces).  Yes, Quasimodo and Esmeralda are there and their story is a sad one and yes, Count Frollo turns out to be a downright despicable antagonist; but, ultimately, this, like Hugo’s Les Miserables is more than a story about its characters – it is a story about the whole history of Paris and about the absurdities of the caste system.  It is the first novel where beggars and thieves are cast as the protagonists and also the first novel in which the entire societal structure of a nation, from King to peasant, is present.  It might also be the first or most prominent work to feature a structure (the Cathedral of Notre-Dame) as main character.  Hugo’s approach, and this novel in particular, would later influence Charles Dickens, Honore de Balzac, Gustave Flaubert, and other sociological “writers of the people.”  When one thinks of writers who are genius at fictionalizing the history of a people, the first who comes to mind might be Tolstoy, but Victor Hugo certainly belongs in this league.

“For, even if we believe in nothing, there are moments in life when we are always of the religion of the temple nearest to hand.”

“Never has there been loose such an unruly mob of students! It’s the accursed inventions of the age that are ruining everything–the artillery, the muskets, the cannons, and above all the printing press, that scourge brought from Germany. No more manuscripts, no more books. Printing is ruining bookselling. The end of the world is upon us.”

“You can be a great genius yet understand nothing of an art which is not your own.”

“Fashion has done more harm than Revolutions.  They have cut into the quick, they have attacked the wooden bone-structures of the art, they have hewn and hacked and disorganized, and have killed the building, in its form as well as its symbolism, its logic as well as its beauty.  They have also remade it: which neither time nor revolutions have presumed to do.”

“She danced, she spun, she whirled on an old Persian carpet thrown carelessly down beneath her feet, and each time she spun and her radiant face passed in front of you, her great black eyes flashed like lightning.”

“I have not crawled all this time on my belly with my nails in the earth, along the countless passages of the cavern without glimpsing, far ahead of me, at the end of the unlit gallery, a light, a flame, something doubtless the refelection from the dazzling central laboratory where the wise and the patient have taken God by surprise.”

“I perceived, at the end of a certain time, that I was, for one reason or another, fit for nothing. So I decided to become a poet and rhymester. It’s a profession one can always take up, if one’s a vagabond.”

“To destroy the written word, you need only a torch and a Turk. To demolish the constructed word, you need a social revolution or an earthquake. Barbarism swept over the Colosseum; a deluge, perhaps, over the pyramids. In the fifteenth century everything changed. Human intelligence discovered a way of perpetuating itself, one not only more durable and more resistant than architecture, but also simpler and easier. Architecture was dethroned. The stone letters of Orpheus gave way to the lead letters of Gutenberg.”

“The press, that giant engine, incessantly gorging all the intellectual sap of society, incessantly vomits new material for its work. The entire human race is its scaffolding. Every mind its mason. Even the humblest may block a hole or lay a stone….It is the second Tower of Babel of the human race.”

“One drop of wine is enough to redden a whole glass of water. To tinge a whole company of pretty women with a certain amount of ill-humor, it is enough for just one prettier woman to arrive on the scene–especially when there is but one man present.”

“When one does evil one must do the whole evil.  To be only half a monster is insanity! There is ecstasy in an extreme of crime. A priest and a sorceress can melt in delight together on the straw of a dungeon floor!”

“Every civilization begins in theocracy and ends in democracy.”