Review: One Flew Over the Cuckoo’s Nest by Ken Kesey 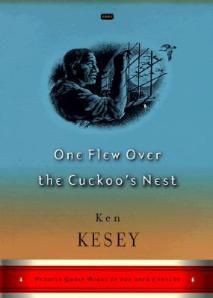 One Flew Over the Cuckoo’s Nest by Ken Kesey

4 – Plot/Story is interesting, believable, and impactful.

One Flew Over the Cuckoo’s Nest is the story of a group of men residing in an Oregon (USA) mental hospital during the late-1950s /early-1960s.  It is narrated by a seemingly deaf and dumb inmate called “Chief Bromden,” who is half-white and half-Native American.  His story revolves primarily around the “battle” between a new inmate, Patrick McMurphy, and the ward’s head nurse, Mildred Ratched.  There are also minor struggles between the white inmates and the black staff, who work for (and whose loyalties lie with) Nurse Ratched.  While some of the patients are in the hospital for valid reasons, such as Bromden’s inability to engage with the world (he is perhaps somewhat schizophrenic), others seem to use it as a hiding place of sorts.  Many of the men are the “victims” of overbearing women – be it their wives or their mothers.  They have been institutionalized because they cannot deal with their emasculation.  McMurphy, the Alpha Dog of the group, comes to the hospital having faked insanity to escape a prison term for statutory rape.  His virility and manhood are what inspire the men of the ward to revolt against Ratched’s authority, and to see her as a woman for the first time.

The main characters are Chief Bromden, the narrator; Randle McMurphy, the “hero”; and Nurse Ratched, the “villain.”  Bromden narrates the story through cloudy, drug-fogged eyes.  He is being medicated for the entirety of the novel, though sometimes, it seems, there is less or more medication, and this naturally follows with less or more clear narration. Still, he is rather unreliable on the whole, even admitting as much sometimes (“… it’s the truth, even if it didn’t happen”).  Bromden is a bit of an outsider.  He has faked ailments, including his supposed inability to hear or to speak.  He reveals himself inadvertently to McMurphy, and we understand that Bromden has just been using these ailments to remain outside conflict and to “witness” things without having to participate in them.  He is also a bit of a Huckleberry Finn personality- an innocent, wrapped up in a complicated situation.  Huckleberry Finn is often torn between doing what “is right” according to his society’s standards and doing what “feels right” to him.  Ultimately, he does what “feels right” (which turns out to be what is actually right), despite pressure from society, religion, etc.  Bromden is caught in similar predicaments.

McMurphy is a comic book hero if ever there was one – bold, brash, and flawed.  He also, fittingly, has a hero complex.  He believes he needs to save these men from Nurse Ratched because he believes that Nurse Ratched, being “in charge,” must necessarily be in the wrong.  While Ratched is not necessarily the warmest of creatures (far from it), she is also a woman in a precarious situation – she is attempting to maintain balance and calm in a psychiatric ward filled with insane people.  While McMurphy labels her a “ball buster” and leads the men to revolt against her, she tries to maintain control; ultimately, that is what the battle is all about – control.  But does either Nurse Ratched or McMurphy truly want control for the right reasons?  Are the patients’ best-interests their first priority?

Minor characters, such as “The Black Boys,” Billy Bibbit, Dale Harding, and Nurse Pilbow are all present to serve a function, be it to inspire conversation on race or sexuality, religion, homosexuality, femininity, or emasculation.

One of the most interesting aspects of this novel is its prose, particularly as it is closely related to the narrator, Bromden.  As Bromden’s mind clears or fogs, so does the prose become clearer or more convoluted.  It is impossible to know, for sure, whether the things being narrated are really happening (or have ever happened), or if they are just figments of Bromden’s imagination (such as the mechanical devices, alive in the walls).  For the first half of the novel, the story is narrated in the present tense; then, suddenly, there is a shift to the past tense (and future back-and-forth to follow). This creates some ambiguity as to when things happened and, given the end of the novel, one is left wondering whether Bromden might have escaped or, perhaps, imagined himself as having escaped, then relaying the story after the fact (either after his “striking out” – another Huck Finn parallel- or after his psychotic break which lead him to believe that he left, when he really didn’t).  The language itself is simple but, as Kesey points out, sometimes the best writing does not make for the best story.  Part of why One Flew Over the Cuckoo’s Nest works so well as a narrative is because it is simple but strange; it is straightforward, but twisted; it is clear, but perhaps entirely unclear.

Ken Kesey’s 1962 novel, One Flew Over the Cuckoo’s Nest is a haunting look at the polar natures of power and authority, madness and sanity, vitality and emasculation.  Published to critical acclaim, the book is unique in its ability to be both comic and tragic throughout.  Kesey’s background in comic books & graphic novels comes across loud and clear, as there is a clear battle between certain elements of “good” and of “evil.”   Some of these battles are explored in the dichotomies of feminine vs. masculine and civilization vs. the wild.  There is also an interesting exploration of laughter as some kind of superpower – laughter giving strength and courage; laughter healing pain, etc.  Also impossible to ignore is the Christian imagery, with McMurphy a Christ-like figure.  We witness scenes which recall The Last Supper and the Crucifixion, not to mention echoes of the Money Lenders, the Pentecost, and the Betrayal.  There is also the fishing trip (which, one should notice, includes twelve men – twelve being the number of disciples Christ had) where Bibbit is told to be a “fisher of men.”  The phrase is an evangelical one that describes how Christians on a mission to convert others would be viewed.  Another overt reference includes the repetition of the phrase “I wash my hands…”, which McMurphy hears in the Disturbed Ward and which was the phrase used by Pontius Pilate at the crucifixion of Christ.  The major difference, though, is while Christ died so that the sins of his followers could be forgiven, McMurphy’s sacrifice seems to be somewhat different.  Rather than dying for the patients’ sins, he seems to be trying to save them from the abuses of society (and the ward) against them.  He is much more a martyr, attempting to awaken and inspire his people, than a savior hoping to cleanse them.

“All I know is this: nobody’s very big in the first place, and it looks to me like everybody spends their whole life tearing everybody else down.”

“But it’s the truth even if it didn’t happen.”

“The stars up close to the moon were pale; they got brighter and braver the farther they got out of the circle of light ruled by the giant moon.”

“He knows that you have to laugh at the things that hurt you just to keep yourself in balance, just to keep the world from running you plumb crazy.”

*I include this title as Book 1 for “The Literary Others” event.  The themes of gender roles, masculinity/femininity, and homosexuality are present throughout, and Kesey himself spent a great deal of time with some of the most prominent homosexual writers of the period, including William S. Burroughs and Allan Ginsberg.

12 Comments on “Review: One Flew Over the Cuckoo’s Nest by Ken Kesey”