Review: Islands in the Stream by Ernest Hemingway 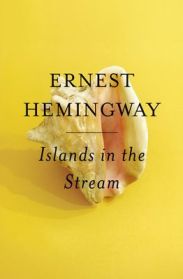 Ernest Hemingway’s Islands in the Stream was published posthumously and was expurgated by Hemingway’s wife.  A note in the preface states that she removed certain portions of the book which she felt certain that Hemingway would have eliminated himself (which begs the question: Why did he include them in the first place?).  Personally, I cannot stand when books are expurgated, particularly by friends/loved ones or editors who think they “know better” than the author.  That aside, the story is interesting and is much more like his later works, such as Garden of Eden than his earlier works.  This does make me believe that there were probably portions of the book that were rather sensitive and could have been very enlightening, particularly to those familiar with Hemingway and his tragic end.  The story is separated into three parts, including “Bimini”, “Cuba,” and “At Sea.”  Each segment explores a different time period in the main characters life, and also explores different aspects of his life and emotions.  There is one connecting thread throughout the three segments, which is family.  My personal favorite section was “Bimini,” where the main character is visited by his sons and lives with a close male friend.  Their relationship is incredibly interesting, especially considering the homosensual nature of it in contrast to the homophobic comments made by some of the characters (and by Hemingway himself, in real life).  The idea of “manly love” is certainly a main focus in part one, but suffers a bit in the second two segments, which are more concerned with grief/recover and war.

Thomas Hudson, the main character, and his good friend, Roger, are the best developed characters in the book, particularly in part one.  Thomas Hudson continues to develop throughout and his character is interesting to witness, as he struggles to grieve the loss of his loved ones.  Hudson’s sons, too, are delightful – not since Garden of Eden have I seen such lovingly, sincerely drawn characters from Hemingway.  In part two, “Cuba,” Hudson’s true love becomes a part of the story and she, too, is interesting and very similar to the woman in Garden of Eden, which leads me to believe that these two posthumous works might be his most autobiographical of them all.  The minor characters, such as the bartenders, Hudson’s houseboys, and his comrades-in-arms in part three, are all well-crafted, sound, and believable.

One difference between Islands in the Stream and Hemingway’s other works is in the prose.  It is still raw, but not quite so sparse or bare as usual.  His descriptions are more flushed out, almost tortured at times.  There is a moment in the book where Hudson is fishing with his sons, and it is described in such detail (even better, in my opinion, than in Old Man and the Sea) and with such deep emotion that I actually found myself becoming thrilled and engaged – by fishing. Something I truly dislike.  That is the kind of magic Hemingway works with his words, his language, and his style.  It is brilliant, as usual, but, again, I found myself much more drawn to the first section than any others – it is an exposed nerve.

Personally, I try my very best to separate writers from their works; however, I do believe that, no matter how hard we try, we writers reveal bits of ourselves in our works.  Hemingway is known for his “masculine” prose – his ability to tell a story without much emotion, without much sap, without any flowery nonsense.  This leaves him, throughout most of his chronology, rather walled-off from his works.  In Islands in the Stream, however, as with Garden of Eden, I truly believe we see Hemingway exposed – there is a very sensitive, deeply troubled side to this man and that these books were published only posthumously speaks volumes to his relationship to them.  Islands in the Stream is a delicate exploration of love, loss, family and friendship.  It is a deeply moving tale of a man, an artist, fighting to wake up and live every day, despite his haunting sadness.

“Out of all the things you could not have there were some that you could have and one of those was to know when you were happy and to enjoy all of it while it was there and it was good” (99).

“Hell was not necessarily as it was described by Dante or any other of the great hell-describers, but could be a comfortable, pleasant, and well-loved ship taking you toward a country that you had always sailed for with anticipation” (195).

“He thought that on the ship he could come to some terms with his sorrow, not knowing, yet, that there are no terms to be made with sorrow.  It can be cured by death and it can be blunted or anesthetized by various things. Time is supposed to cure it, too. But if it is cured by anything less than death, the chances are that it was not true sorrow” (195).

“I drink against poverty, dirt, four-hundred-year-old dust, the nose-snot of children, cracked palm fronds, roofs made from hammered tins, the shuffle of untreated syphilis, sewage in the old beds of brooks, lice on the bare necks of infested poultry, scale on the backs of old men’s necks, the smell of old women, and the full blast radio” (241).

“There’s some wonderful crazies out there. You’ll like them” (269).

7 Comments on “Review: Islands in the Stream by Ernest Hemingway”