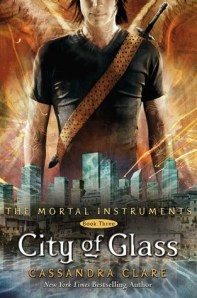 City of Glass is the third book in the Mortal Instruments sextet.  It follows the story of Clary, Simon, Jace, Alec, and Isabelle, which is first established in City of Bones and then built upon in City of Ashes.  In this one, Clary and Jace, having fought together in the battle against their father, Valentine, have resolved to put their rather odd feelings for each other aside and move forward as siblings.  Clary, having gained recognition and respect in the Shadowhunter world, having fought to protect New York (and the world) from Valentine and his demons, gains permission to visit Alicante, the capital city of Shadowhunters.  Jace, hoping to protect her from what he is sure will turn into a difficult interrogation (no one else being as yet aware of Clary’s special abilities), attempts to get himself and the others through Magnus Bane’s portal before Clary can join them.  Of course, nothing goes quite right and, eventually, Clary finds herself in Alicante, where Simon has been imprisoned, and begins to learn much more about her family history and the history of the Shadowhunter race.  Soon, through his network of spies, Valentine manages to discover where the third Mortal Instrument has been hidden and manages to bring down Alicante’s protections, forcing the Shadowhunter and downworlder races to come together or face extinction.

One of the reasons why this third book is my favorite in the series, so far, is that we finally get more history about the Shadowhunter race, the rise of Valentine, and the histories of Clary and Jace’s families (as well as the Lightwoods).  There is some overcomplicating to the Valentine story, which leaves some of the relationships and their necessary resolutions feeling contrived and convoluted, but it also allows for a clearer path for the main characters, moving forward into the second half of the sextet.  The relationship between Magnus Bane and Alec develops nicely, and unlikely friendships (such as between Jace and Simon) begin to form, which adds nice depth and interest to the overall plotline.  Allowing for the building of these minor relationships, such as those between Luke and Jocelyn or Simon and Izzy, gives strength and complexity (and a bit of relief) to the main relationship between Jace & Clary (which, if not complicated enough, also gets added complications from two new potential romantic interests).  Some characters from previous books return to add perspective and other new characters, such as Luke’s sister, provide some clarity and new information to the history of this story and the people involved.

Clare is definitely fantastic storyteller and her prose manages not just to keep up with the rapid pace of her stories, but also to give the story appropriate constraint and structure.  The chapters are long, which is unusual in such a fast-moving book, but each chapter works well as its own small scene with connections to the chapters preceding and following, as well as to the larger story (which includes the earlier and likely the later books) as  a whole.  I always enjoy Clare’s inclusion of literary allusions, though I still would like to see her give more pointed reference to the works and writers she’s invoking (many of the chapter titles come from prominent literary works, for instance, as do various phrases throughout the book – even a ‘Notes’ section at the end of the book, with explanations about why she chose to title her chapters certain ways would be not only professional but also quite interesting and fun, particularly for readers who then might be inspired to read the original works).  Still, Clare controls her story well, allowing it to surge forward when appropriate, as a fantasy-adventure story should, but always keeping the reigns so that the plot does not lose direction.  The language and structure are appropriate to the reading level.

One of the primary criticisms of this book is how blatantly derivative it is and, to be honest, I could not help shaking this feeling throughout the entire reading experience.  There are clearly many elements of the story which are taken directly from other fantasy works, such as the Lord of the Rings, Harry Potter, and even Star Wars.  While it is important for sci-fi/fantasy writers to be aware of the predecessors and, in most cases, to draw upon that tradition to inform their own works, Clare has not quite managed to balance inspiration with originality – she leans far too heavily on reworking others’ themes, perhaps modernizing them, but employing them in such a way as to find them basically creatively recycled.  This is an important and valid criticism, I think, but it must also be said that she does have a solid grasp on contemporary social issues and includes them appropriately in her works – modernizing the fantasy genre in a way which is only just beginning to take hold.  The melodrama and humor are balanced well and the book brings a satisfying if rather predictable ending to the first half of the sextet (I felt the trilogy could end here, so I am not quite sure what the next three books in the sextet will be all about).  Ultimately, those who enjoyed the first two books and who have come to love these characters and their stories will likely be quite satisfied with this third installment – I am interested to see what happens next.

“Love didn’t make you weak, it made you stronger.”

“People aren’t born good or bad. Maybe they’re born with tendencies either way, but it’s the way you live your life that matters.”

“I love you, and I will love you until I die, and if there is life after that, I’ll love you then.”

“I am a man and men do not consume pink beverages. Get thee gone, woman, and bring me something brown.”

“You never really hate anyone as much as someone you cared about once.”

5 Comments on “Thoughts: City of Glass by Cassandra Clare”