Since I surpassed my 2013 goal of 60 books read (I’m up around 64, right now, with 2 books in progress and likely at least 1 more to go) before year’s end, I thought I would take a cue from some of my favorite bloggers who are posting a “Best of 2013” list.

The list below includes a small selection of categories from which I’ve read this year, with one “favorite” spotlighted for each category.  These are books I’ve read in 2013, not necessarily books that were published in 2013.  I hope you enjoy!

From Queer Theory and Feminism, to Linguistics, Rhetoric, and Film Studies, this was a year of heavily theory-based, academic reading, for me.  I read some incredibly interesting texts on the history of sexuality, the French Revolution, bibliographical and textual studies, and the creative writing process.  Of all of these academic texts, though, I think my vote goes to a short little book called Responding to Student Writers, written by Harvard Professor Nancy Sommers, whom I had the honor to meet and work with this summer.  As an English instructor (and, more specifically, a teacher of first year college composition), I found the suggestions, tips, tools, and resources in this booklet to be helpful, as was the CD of student interviews that came with it.  Nancy Sommers is a well-respected expert in the field, and for good reason.  If you are a teacher who often assigns essays/research papers, analyses, etc., then Sommers’ work shouldn’t be missed.

I read a number of books this year which would fall into the category of literary theory and/or “on writing.”  I thought it prudent, then, to mention some of these and to pick a “favorite” amongst a group of rather good texts.  These include, for instance. E.M. Forster’s groundbreaking Aspects of the Novel, Terry Eagleton’s How to Read a Novel, Jim Powell’s graphic guide Postmodernism for Beginners, Judith Mayne’s brilliant collection of essays on feminist film studies, The Woman at the Keyhole, and Anne Lamott’s wonderful Bird by Bird.  Of all the books that fit this category, though, my favorite overall has to be Virginia Woolf’s lecture series, A Room of One’s Own.  Anyone interested in writing, and particularly the historical connection of women and/or socioeconomic status to the process, should definitely check this one out. 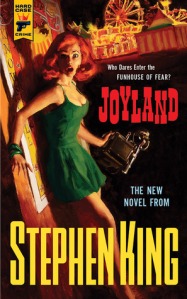 I did not read all that much contemporary fiction this year, which is not unusual (I tend to lean towards classics and/or academic texts).  Still, there were enough to be considered and I believe this is a popular category for many of my readers, so I thought I should name a few standouts. First is a wonderful collection of short stories by E.J. Runyon called Claiming One.  Another was the highly controversial but interesting Tampa by Alissa Nutting.   My favorite, though, had to be Stephen King’s Joyland.  Normally, King would probably be the stand-out in the horror/mystery/paranormal genre, and he certainly nailed it with Doctor Sleep, his sequel to The Shining, but Joyland was much more akin to some of his earlier stories, such as “The Body.”  There was some suspense, some magical realism, and a bit of crime-thriller to it, but mostly it was a book about summertime, coming-of-age, and living life. I absolutely loved it.

I read much more genre fiction this year than I did general fiction (other than classics, which will be addressed below), so I am excluding a general fiction category and simply focusing on those books which might be considered fantasy, science fiction, horror, etc.  Of these, I have read a number of works, including The Gunslinger and Doctor Sleep by Stephen King, both of which I highly recommend.  Also,  Inferno by Dan Brown, The Haunting of Hill House by Shirley Jackson, and The Golem and the Jinni by Helene Wecker. Although Shirley Jackson’s book came close to taking the title, I have to say I was pleasantly surprised by The Golem and the Jinni.  I finished it recently and have not had time, yet, to write & post a review, but it was a stunning piece of work.  There’s something of the old-fashioned Romantic wonder and awe of nature in this one – it is bits and pieces of Mary Shelley and Robert Louis Stevenson fused with contemporary narrative style. Loved it.

This is an important category for me.  As most of you know, I’m currently in my second year of Ph.D. studies in English, but I’m also about to finish my graduate certificate in LGBT studies.  That said, I have not limited this category to works “of literary merit.”  In this category, I considered books on theory, books which would be called “classics,” and also contemporary fiction, young adult, and whatever else. This made it a bit tough, as I had to choose from a range which included Gods and Monsters by Christopher Bram (fantastic), Sexuality in Europe by Dagmar Herzog (fascinating), and Shine by Lauren Myracle (touching).  Others that deserve mention include Sodom on the Thames by Morris Kaplan, and Aristotle and Dante Discover the Secrets of the Universe by Benjamin Alire Saenz.  It was such a great pleasure to read so many awesome LGBT works of fiction and nonfiction this year.  The ultimate prize, though, has to go to the incredible Two Boys Kissing, by David Levithan. This book touched my soul – it is a book that I felt had been missing from the conversation for far too long, and Levithan delivered it to us beautifully.

This is probably the largest category that I had to consider this year, with texts ranging from biography and autobiography to cultural studies, gender and sexuality, literary theory and criticism, and so much more.  It almost had to become separate categories, almost. Some of my favorites of the year included How to Read Literature Like a Professor by Thomas Foster, Queer Theory by Annamarie Jagose, Vive la Revolution by Mark Steel, and Colonialism and Homosexuality by Robert Aldrich.  One of the books that I found most helpful, interesting, and readable was Feminism: A Very Short Introduction by Margaret Walters.  When all is said and done, though, my absolute favorite nonfiction read this year was Salinger by David Shields and Shane Salerno.  If you settled for watching the documentary, then you are missing out on so much.  This biography, unlike others on Salinger, was in-depth, unbiased, well-researched, and revelatory in many ways.  Anyone interested in the life and works of J.D. Salinger should put this at the top of their list.

This was my second largest category to consider, and this final call was so difficult!  I love classic literature, so picking one book from such an incredible list of authors, periods, and subjects is almost impossible.  Some of the best of the year include O Pioneers! by Willa Cather, which shouldn’t be missed, Mansfield Park by Jane Austen, which was a difficult but rewarding read, A Streetcar Named Desire by Tennessee Williams which was stunning, The Adventures of Don Quixote which was hilarious and which I enjoyed far more than I had anticipated. My favorite, though, goes to one of the first books I read this year and one which has stuck with me throughout 2013 – Orlando by Virginia Woolf.  It is poetic justice for Woolf, perhaps, that she has landed on this “best of” list twice, considering I used to vehemently refuse to read her books (I had one bad experience with her many years ago, and swore never to return!).  But Orlando is a stunning, daring epic.  She was disappointed with it (or, more accurately, with the supposed lack of focused attention she paid to it), but it’s one of the best books I’ve ever read.

Winger by Andrew Smith.  Not only was this the best Young Adult book that I read in 2013, but it was one of the best books I read this year, period.  The competition for this category was stiff, with books by Veronica Roth, Rick Riordan, David Levithan, Benjamin Saenz, Rick Yancey, Cassandra Clare, and Michael Scott to be considered. All of these books were enjoyable and some of them were downright incredible, but Smith’s Winger is a force to be reckoned with.  If you haven’t yet read this book, I would encourage you to read my review and see if it’s for you. Odds are, it is. I also highly recommend his other works, especially Stick, and I look forward to his next publication, Grasshopper Jungle, which is due out early in 2014.

My favorite post of the year: On Horrors and Heroes

My favorite event of the year: Austen In August

My favorite review of the year: Mansfield Park by Jane Austen

One blogger I couldn’t get enough of this year:  O of Behold the Stars

So, those were my favorites of 2013.  I am currently reading Ulysses by James Joyce and On What Grounds (Coffeehouse Mysteries #1) by Cleo Coyle, both of which I’m enjoying, for different reasons.  I plan to read one more this year – so that’s a possible three books I could add to this list of “favorites,” but let’s just leave them here as honorable year-end mentions, shall we?

What were YOUR favorite books this year?