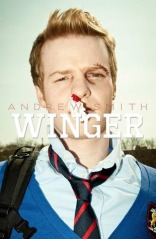 Ryan Dean West is Winger, so nicknamed for the position he plays on the high school Rugby team.  He is fourteen years old and, being intellectually gifted, is already heading into his junior year of high school. He begins the new school year as a resident of Opportunity Hall, the “reject” wing of his school campus’s dormitories.  How did such a bright kid end up in exile?  Take one part smarty-pants, one part wild boy, and two parts bad judgment, and there you have it!  Living in Opportunity Hall with Chas, the school’s biggest bully, as a roommate sucks, but it is not the biggest of Winger’s problems.  And the fact that Chas’s girlfriend is totally lusting after him is bad, but still not the worst of it.  That one of Winger’s friends posts pictures of his band-aided scrotum on the internet and another is gay (how do you deal with that!?) definitely causes Winger some anxiety, but these are still not the worst of his issues.  No, the worst part is, he’s in love.  Not so bad?  Well, it is if you’re in love with your best friend.  And it’s really bad if your best friend is a girl two years older than you.  Two years might not seem like such a big deal to those of us who are now counting our birthdays in decades instead of years, but when you’re young, two years feels like a generation, especially when another guy, an older guy, your best friend, in fact, is competing with you for the same girl’s attention.  Winger is a classic coming-of-age story for the new era. It is smart, daring, honest, and dangerous.

One of my favorite things about Smith’s books has always been the characters.  Smith clearly knows and understands his characters inside and out.  No one in the story is there for the sake of being there – they are all integral to the story’s plot and progression, be it for comic relief, emotional growth, romance, sexual awakening, or whatever else.  Winger is no exception to this mastery.  The main character, Ryan Dean, is not the greatest guy in the world; in fact, he does some pretty lousy things.  But he’s growing up.  He stumbles and he learns.  He says stupid things, but reflects on them later.  We get annoyed with him, sometimes, but we root for him because we can see and remember our own journeys to adulthood reflected in his.  The bullies, too, Chas and Casey Palmer, are equally rounded – they are not all bad, and they are not just there because every protagonist needs an antagonist.  They have their stories and histories, too, and they are equally important to this world that Smith has created.  Although the story focuses on the students, Winger and his friends, Smith also captures the best and worst of adulthood.  There are teachers (Mr. Wellins!) who live in their own little obsessive worlds, trying to make their students see what they see in the things they love; there are absent parents and clueless mentors; there are even unlikely romances between creepy hall directors who ultimately let their residents down in the worst possible way.  This mixed bag of characters, their individualities, and their interconnectedness with one another and with the main story itself all help to create a story world that is believable and engaging, hilarious and terrifying – just like life.

When you have a favorite writer, the anticipation that builds when waiting to read his or her new book is a peculiar experience.  You know you love what they do, but part of you is always dreadfully afraid that the new book might disappoint.  When you’re a self-identified “reader,” there are few things more terrifying and heart-breaking than to be let-down by your favorite writer – it is a fear that few people can know or understand.  So, headed into this reading experience, having loved every single one of Andrew Smith’s published works to date, had me simultaneously nervous and excited.  I discovered Smith when I received an advanced copy of his book Stick from the publisher, for review.  Immediately after finishing it, I bought every one of his books.  And I’ve enjoyed all of them.  Smith has a distinct voice, a poignant style, and a raw and daring point of view.  It is remarkable, then, having already known what Smith was capable of, that Winger has blown my head right off.  Smith clearly cares deeply for this story – the language and style are creative and distinctive, without being distracting.  Smith understands people, but it takes a great storyteller to metamorphose that understanding into a readable, enjoyable story.  He does this in traditional ways, sure, but he also adds unique signatures to his prose and form.  For example, Winger carries on conversations with himself – something we probably all do – but has it ever been so realistically employed in prose?  I don’t think so.  The cartoons, too, add a fun element to the narrative, but also add to the reader’s understanding of the main character/narrator’s personality.  Sometimes his deepest feelings, though caricatured through comic, come across most pointedly in his drawings.  The dialogue, the jokes, the sarcasm, and the descriptions, too, are without flaw.

This year, I have been fortunate enough to have read some great young adult fiction from some of the most popular, award-wining writers.  Although the YA genre is not my particular specialty, I do enjoy it and read it often; in the last 5 months, I’ve read works by Rick Yancey, David Levithan, Lauren Myracle, Cassandra Clare, and Rick Riordan. I’ve enjoyed, to varying degrees, all of their books and have found much to praise about each writer.  But Andrew Smith stands unequivocally head-and-shoulders above the rest, and Winger is in a league of its own.  It is not uncommon to read blurbs and reviews that claim such-and-such book is THE book of the year – for whatever reason.  I have made a point, on this blog, to write my unbiased opinions of books, based on my own criteria – the things that work for me when reading a story.  I’m not sure I’ve ever, in a review, suggested that anyone go out and buy a book.  But there’s a time for everything, and this is that time.  Winger is the first book this year to capture my attention from the start and hold it to the end.  It’s the first story to tug at my heart, my soul, and my funny bone, and to make me believe that this story and the characters in it are real.  If you’re a lover of YA fiction or coming-of-age stories, or if you are, like me, someone who just loves a good story and will dabble wherever you need to in order to find it, then, for crying out loud, go experience Andrew Smith’s Winger.

“Nothing ever goes back exactly the way it was . . . things expand and contract – like breathing, but you could never fill your lungs up with the same air twice” (7).

“Getting through my world was like trying to swim in a pool of warm mayonnaise while carrying two bowling balls” (328).

“I wrote this all down, and I tried to make everything happen the exact same way it did when I was seeing it and feeling it – real time – with all the confusion, the pressure, and the wonder, too” (411).

“It felt like it was going to snow, and the clouds hung so low and white that I couldn’t even see the tops of trees around me. It looked like there was a pillow over the face of the world” (423).

“Almost nothing at all is ever about sex, unless you never grow up, that is. It’s about love, and, maybe, not having it” (438).

“The same words that make the horrible things come also tell the quieter things about love” (439).