We here at The Folio Society are excited to join the Austen in August festivities this year with a special post about some of our Austen editions, and with special prices on two of Austen’s most beloved works!  And be sure to read the entire post for something very special!

About Emma: Appearing in 1815, Emma was Jane Austen’s fourth published novel, written in a burst of confidence following the success of Sense and Sensibility and Pride and Prejudice. The Folio Society’s illustrated edition to mark the novel’s bicentenary, with a specially commissioned introduction by Fay Weldon, whose Letters to Alice: On First Reading Jane Austen’s Fiction has become a classic introduction to Austen’s works. Weldon describes how ‘a hint of success and a whiff of praise’ may have helped bring Austen to the peak of her powers as an artist. 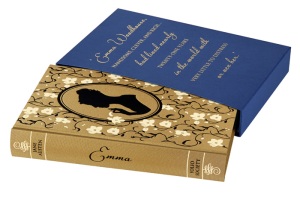 Austen famously said of Emma: ‘I am going to take a heroine whom nobody but myself will much like.’ In this she was proved wrong. Pride and Prejudice may be her most famous novel, Persuasion her most deeply affecting, but for many, Emma is her greatest; the most perfectly balanced between comedy and insight, sparkle and depth. Witty, headstrong Emma Woodhouse, more interested in making matches for others than falling in love herself, is a wholly delightful heroine. The secondary characters – the impressionable Harriet, egotistical Mr Elton and Emma’s gentle, hypochondriac father – are just as unforgettable. 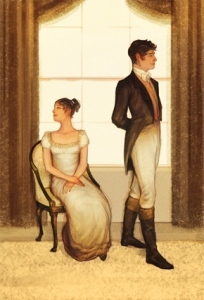 About the Illustrator: Sam Wolfe Connelly is a young American artist who previously illustrated the Folio edition of The Great Gatsby. He has captured the grace and elegance of the period. This edition is published in series with Pride and Prejudice. It is presented in a metallic blue slipcase bearing the novel’s famous first line, blocked in gold type.

About Pride and Prejudice: ‘I had not known you a month before I felt that you were the last man in the world whom I could ever be prevailed on to marry.’ One of the world’s favourite books, Pride and Prejudice has long been regarded as a classic romance. In Elizabeth Bennet and Fitzwilliam Darcy, Jane Austen created the greatest pair of sparring lovers since Shakespeare’s Beatrice and Benedick. This sparkling comedy of manners features an inimitable cast of characters including the obsequious Mr Collins, the autocratic Lady Catherine de Bourgh, and Mrs Bennet, the most embarrassing mother in literature.

The award-winning Balbusso twins have contributed eight exquisite illustrations to this edition, as well as a striking cover design. The novel’s celebrated first line is blocked in gold on the slipcase. In a new introduction, the author Sebastian Faulks praises ‘a novel of almost boundless wit and charm that has withstood film and television adaptations and attempts to define it as a “fairy tale” or a “rom-com”.’

As you can see, we’re crazy about Austen, so much so that we have two new releases coming out this fall: Sense and Sensibility and the reissue of A Memoir of Jane Austen. Keep your eyes peeled for these two excellent pieces of the Austen legacy!

Congratulations to our two random winners, Darlene and Jenna!