Prom and Prejudice (Elizabeth Eulberg), Duty and Desire (Pamela Aidan), Pride and Prejudice and Zombies(Seth Grahame-Smith), Reason and Romance (Debra White Smith), Me and Mr. Darcy (Alexandra Potter)….
And on and on the remakes go. Why, you say? I would suggest that you check out the prior post, Learning to Love Jane Austen, if you want the answer to that question. We are going to talk about the irony of Jane Austen and her very own remakes, aptly titled Juvenilia.

In 1787 or thereabouts, Jane Austen, the natural-born wordsmith, began writing for her family’s enjoyment–stories, poetry, letters, and plays. The ingenious youngster not only wrote her own material, but also satirized others’ works and enlisted her sister and co-hort, Cassandra, to paint watercolors for parts of the collection. These works were written over a period of five years and were separated into three volumes, with Austen’s nephew and niece later adding their own touch to the collection. Austen apparently took great joy in sharpening her baby teeth on stories of forced marriages and fainting maidens. It makes one wonder how flattered the young Austen would have felt seeing her novels re-made into stories of gore, teen angst, and modern-day chick-lit. (She would have loved it, right?!) 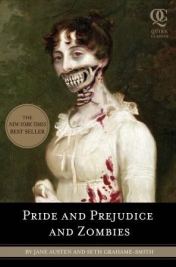 Austen’s own works in Juvenilia primarily poked fun at novels of the time and the History of England and also discussed topics that one might find unusual in a teenager, alcoholism, for one. Her writing in this collection has even been called “anarchic” by some. Not a surprising adjective when one considers that Austen was very much in the minority being a female author of the time. With this type of irreverent wit, humor, and confidence, Austen would probably have greatly enjoyed seeing her character, Darcy, portrayed as a young rich girl’s dream prom date or as a Zombie-slayer.

There have been many, many other types of Austen remakes over the years—from Manga to guides of Austen’s works, movies based on her novels to fictitious prologues of her novels. Readers will always find ways to keep Austen alive, with her stories of love and hope, missed connections and star-crossed lovers. My favorites, though, will always be the re-tellings of her stories with that quirky plot twist. After all, why keep re-telling a classic when you can make it a little bit better?

Thanks so much, Cindi!
Participants: Cindi is also hosting a giveaway just for you!
Check it out over on her blog.