I’m currently reading my way through the complete Edgar Allan Poe (stories and poetry), and thought I would share my reactions to a few pieces at a time. I’m going in the order presented in my anthology, which is not chronological but thematic. The first stories come from Tales of Mystery and Horror. 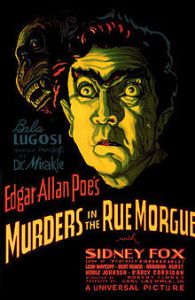 I first read “The Murders in the Rue Morgue” when I was in the 7th grade. We watched the movie afterward, and the whole experience is what turned me onto Poe originally (it’s been a 20+ year obsession ever since). I’ve turned away from Poe’s detective stories in recent years, much preferring his thrillers and his poetry (and criticism). I also much prefer Doyle’s Sherlock Holmes stories as detective fiction, so when I return to Poe, I’m less excited than I was originally.  Upon this re-read, I recalled what I first appreciated about it, though. Dupin is a funny little detective. He takes himself so seriously, in contrast with Sherlock Holmes (usually – he is quite serious in some of the stories, as is Watson, but in many of them he’s mostly playing) and in contrast with some of Agatha Christie’s famous detectives, too. This is no surprise, though, since Poe, too, was a serious fellow. This one is also considered the first modern detective story, and I’m always pleased to be reminded of how innovative and forward-thinking Poe really was, across all genres. He has many, many fans, and he’s often taught in school, but I think few really appreciate his genius and give him the credit he truly deserves, partly because his personal life was so, well, awkward and disappointing, and a bit creepy. In any case, “Murders in the Rue Morgue” finds Dupin on the search to solve a most serious and difficult case. Two women have been brutally murdered. Witnesses heard the suspect but couldn’t understand him (a foreigner? gasp!) and no one seems to have seen him. The tale is told through a narrator close to Dupin, the first Watson, as it were, who always hyperbolically describes Dupin’s most extraordinary skill for ratiocination. Doesn’t this remind you of what Doyle would do with the Watson/Holmes dynamic: “‘Dupin,’ said I, gravely, ‘this is beyond my comprehension. I do not hesitate to say that I am amazed, and can scarcely credit my senses. How was it possible you should know I was thinking of — — ?’ Here I paused, to ascertain beyond a doubt whether he really knew of whom I thought.” The story includes elements of the bizarre and mysterious, as well as moments of heightened pathos bordering on terror. It’s one of Poe’s best for this combination of methods. Rating: 4 out of 5.

This is another of Poe’s Dupin stories, and one which I have read multiple times. I first read it about a decade ago, then again after seeing the John Cusack film, The Raven, which incorporates a number of “copy cat” murders based on Poe stories. Some people have called this a “sequel” to “Murders in the Rue Morgue,” which is why I think it is indexed second in my anthology even though the stories were published two years apart. This story is actually based on a real life murder, predating Capote’s “genre-creating” In Cold Blood by a century. It was also likely the first time a real life crime had been fictionalized in the detective genre, considering Poe invented the genre. So, once again, he inaugurates a soon-to-be imitated practice. Certainly, Poe adds more sensationalist fiction to his tale than Capote, who tried to make his emphasize the “non-fiction” in “creative non-fiction.” I always enjoy this story more than I think I will. Something about the measured violence, the pace and tempo, and that same balance of mystery and malice, all works together to drive this exciting plot forward. This one also hints at Poe’s intellect and deductive reasoning skills, a masterful critical capacity which also let him write such brilliant literary criticism. As he writes in a letter in 1842, less than a year before publishing the story: “Under the pretense of showing how Dupin … unravelled the mystery of Marie’s assassination, I, in fact, enter into a very rigorous analysis of the real tragedy in New York.” In other words, he evaluated the original crime and acted the part of detective in order to write about it accurately (and then with his own added flair for the dramatic). Rating: 2.75 out of 5.

“I had walled the monster up within the tomb!” This story, like “The Tell-Tale Heart” is an exploration of guilt. The main character commits a disturbing crime, certain that he’s been so clever as to avoid any possible detection, but is then stalked by feelings of regret over having done the deed. Ultimately, the character likely would have gotten away with the crime, but he brings about his own downfall because he feels so badly about what he is done. Like many Poe stories, this one begins in the present and finds the narrator (criminal) retelling the actions and events from his own rather unreliable point of view. This adds intrigue and uncertainty, but also heightened sense of emotion and terror as it brings the reader psychologically closer to the criminal/madman. The pace and timing of this particularly story is very strong, and the fact that the narrator actually commits two crimes (both in fits of rage), increases the complexity and tension of the overall plot. The atmosphere created by the narrator’s madness and subsequent guilt, as well as the rising and falling action when the narrator assumes he will get away (remembering that the reader sits most closely to this perspective), is extraordinary. The denouement, which surprises the narrator and the police officer who is about ready to end the investigator and clear the man of any wrong-doing, is particularly ironic because it was brought about by the narrator’s own hubris. This was my first time reading “The Black Cat” and I’m surprised that it’s not discussed more often. It might be too similar to “The Tell-Tale Heart,” which does the same work a bit more compellingly. Still, I loved this one. Rating: 4.25 out of 5.

← My Personal Canon
Thoughts on 3 Classics →