A few weeks ago, I was at Half-Price Books selling a big chunk of my library when, lo and behold, I stumbled across all three books in this Mutant Empire series. I’m absolutely upset with the 1990s version of Marvel Comics’s X-Men and, years ago, I had read another novelization (a cross-over with Star Trek: The Next Generation called Planet X by Michael Jan Friedman), which I really enjoyed; so I knew I had to grab these, especially since they only cost a few bucks.  X-Men: Siege brought me back to those ’90s comic books I so loved, and to some of the film adaptations. There’s much that is familiar to anyone who grew up reading the Uncanny X-men series, but plenty that is unique, too. Magneto has begun his plan to create an all-mutant Utopia, beginning with a remote location off planet earth but with the intention of, eventually, taking over the entire planet. Meanwhile, trouble is brewing for Cyclops’s dad, a kind of intergalactic space pirate, and the Shi’ar Empire. Professor Xavier decides to split the X-Men into two teams, one to take on each of these terrible challenges. For those who don’t already know the characters, especially the liminal ones, it might be a bit of a confusing or uninteresting read; but if you already know and love these stories and characters, then you’ll probably enjoy Siege quite a bit. I’m looking forward to reading the next two books in the series, but I do wish the author had found a better proofreader/editor (the number of typos is a bit jarring).

Astrophysics for People in a Hurry by Neil DeGrasse Tyson

I’ve been wanting to read more science books for such a long time, but while I was buried by reading for my PhD, I just couldn’t find the time. So, I was pleased when, right about the time I graduated with my degree and found some time for actual “free reading,” Neil DeGrasse Tyson goes ahead and publishes a new book! And, as the title suggests, for someone like me who is often, “in a hurry.” What are the odds!? While I can’t pretend to have understood everything in this book, I do think I got the gist of most of it, and that is, I think, the point: to help folks like me who are curious about science and who want to be a bit more scientifically literate, get there. Tyson has an engaging voice and style, and he can explain complex topics very directly and through the use of helpful analogies. Tyson also has a larger purpose, here, which is to explain why science is so important and how dangerous it is for a society to move away from it, the way we here, unfortunately, have been doing for some time. He explains just how much science means to him and how he believes a scientifically literate culture can feel more, not less, connected to one another. Each chapter deals with a different aspect of astrophysics, concisely addressed, and they’re all fascinating. My favorite part, though, has to be the very brief final chapter titled, “Reflections on the Cosmic Perspective.” It’s simply beautiful.

The Hate U Give by Angie Thomas 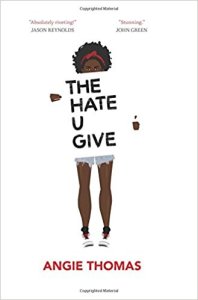 This book: wow. I’ve been trying to figure out how to describe this book and my reaction to it. For help, I started to search through the blog-o-sphere (or at least the parts of it that I watch) to see what others are saying, or even just to have links to send you all to for reference and good thoughts, but to my surprise, the majority of what I’ve found = thoughts such as, “I need to figure out how to review this!” Hey, at least I’m not alone! Essentially, The Hate U Give is an incredibly timely and relevant perspective from an honest and creative new voice that is much-needed in our culture right now. Starr is a 16-year-old black girl living in a dangerous city. Her father had been in prison but is now a successful business owner. Her mother is a nurse with great potential. Her uncle is a police officer who lives in a beautiful, gated community. She and her brothers go to private school in another district because her parents are able to afford it. In other words, she lives in two worlds. She witnesses the best and worst possible of all American cultural and societal realities. The worst? She has seen her two best friends killed in front of her eyes. The best? She has a strong and loving family, a boyfriend who loves her, and some* real friends who accept her for who she is and not for the color of her skin. Thomas is giving us such a powerful and important story, here, but more importantly, she offers multiple perspectives, a number of options, and a the sense of hopeful possibility, without proscribing a single ideology or facetious answer to our nation’s complicated racial problems. I can’t wait to see what she does next (I hear a film adaptation might be in the works).

3 Comments on “X-Men, Astrophysics, and Hate”