The Cement Garden by Ian McEwan 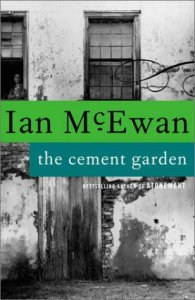 Jack is fifteen. He lives with his parents and three siblings, one older sister (Julie), a younger sister (Sue) and younger brother (Tom). The family seems relatively typical, at first, but the children all turn out to have their bizarre, disturbing quirks, which manifest themselves after the unexpected death of their father and slow, sickly death of their mother just two months later. The kids, worried about being separated from one another and taken from their home, commit an almost unfathomable act. They live together with this secret, in demented fashion, until Julie’s slighted boyfriend, Derek, discovers the truth and puts it all to an end. The Cement Garden is comparable only to V.C. Andrews’ Flowers in the Attic but, since these kids act the way they do almost naturally, and certainly willingly, the story is even more perverse and troubling than the horror that Andrews created in her own thriller.

For a short book, the characters were very well written. Each of the children have distinct personalities and identifiable traits. Jack is moody, self-absorbed, and physically (and psychologically) dirty. Sue is quiet, apathetic, and submissive; she is the “documenter” of the bunch, watching everything happen and writing it all down in her journal. Sue is the most observant and understands better than anyone what each of her siblings is like, and what is happening to them all. Tom is a very disturbed young boy, lost without guidance. He loves to dress as a girl (nothing inherently wrong with this, in my opinion, except for the twisted connection it holds to his eldest sister Julie and their mother). Tom enjoys being treated like a baby, nursed and coddled. Julie, the eldest, is a power-crazed beauty. She is seriously disturbed and encourages her brother Jack’s unhealthy infatuation with her, toward a place that should never be reached. Derek, the boyfriend, and the kids’ parents, though minor characters, are also distinguished with independent traits, mostly weaknesses. For example, even when Derek finally takes a stand, it is only because he feels angry and jealous of Julie and Jack’s relationship, not because he means to do the right thing for the sake of it being right.

To me, the story was highly disturbing. It will be hard for many to get through it; fortunately, I have a lot of experience with dark, demented, and disturbing literature (being a Dennis Cooper scholar and William S. Burroughs fanatic). Still, child perversity and incest are not comfortable issues and, had McEwan not been a powerful and masterful story-teller, I probably would have given up on this book. The language is well crafted, though, and the prose flows evenly and smoothly. The story too, is an important one, if hard to witness. Things like this do happen in the real world, though nobody ever writes about it or cares to think of it. So, “thanks” to McEwan’s writing ability (I suppose I should be grateful?), I was able to stay engaged enough to manage through to the end. It was certainly a wild ride – I am just glad I finished it long before bed-time.

The book certainly touches on the darker aspects of family and isolated relationships. It deals with child psychology, aberrant sexuality, fear, and immaturity. What does a group of children do, after all, when their parents die suddenly – with no guidance, no extended family to reach out to, and no nearby neighbors to look toward for support? The children were left an inheritance of sorts, which had been explained to the two eldest in advance so, in their minds, they were surviving in a way their mother had intended, on their own and together. But this isolation creates rather immoral, dangerous situations and one must believe that none of these children will ever develop into healthy adulthood. Is it hard to read? Yes, it is even hard to imagine; but, as I mention above, I believe these types of scenarios do exist, only to be heard of in brief 30-second snippets on the news. It is interesting, if rather gross, to witness these relationships in action, as it were, and to get a glimpse at the “how” and “why” of such situations.

5 Comments on “The Cement Garden by Ian McEwan”