The Funhouse by Dean Koontz 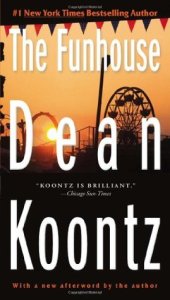 I can’t help comparing Dean Koontz to Stephen King. This is unfortunate for Koontz, because he simply cannot compete. I suppose that’s harsh and maybe even unfair criticism, but there we have it.

The Funhouse begins with a somewhat interesting premise that is muzzled by completely uninteresting characters. There’s a man, a sexy, charming bad boy who works for a carnival, and a young woman living under the suffocating influence of her mother, a religious zealot (of course this young woman will eventually become her mother, but no matter?) They run off together, he turns out to be not just a jerk but a monster (for real) and they have a baby. This baby… is it human? Is it a demon? Mom and Dad each see that baby a little differently, one is terrified of it and determined to kill it. The other adores it and would do anything to protect or avenge it.

So, I guess that sounds like a wild ride, and it is. It also all unfolds in the first section of the book. The rest of the novel deals with a younger generation who must deal with the repercussions of their parents’ fall-out and that first “abomination” of a baby, which may or may not be alive. Or evil. But then again, it might be a different evil baby that is now a man, even though its pseudo-step-siblings are still children. Who knows? Does it matter?

I suppose this simply was not the book for me. The elements I tend to enjoy about thrillers and horror novels are the epic battles between good and evil. The struggle for internal strength over weakness, to find the light in the darkness and somehow overcome, survive. Even when elements of the supernatural are introduced, I find myself willing to go along for the ride, provided the other elements are treated well and fairly, and without much cliché (to be fair, King also does sometimes fall into the clichéd.) That said, the good versus evil in this particular story doesn’t work for me the way it does in King’s novels, for example, because the evil seems to be too supernatural and too pure (“I need a bad guy. What’s the grossest, most evil, inhuman, irredeemable bad guy imaginable? I’ll use that!”).

Even the good, the flawed characters, are indeed flawed human beings, which is normally a positive trait in my opinion. Heroes who are too pure are just as boring as villains that are completely evil. Each of these lacks internal conflict and any real motivation. So, one might want to root for these kids, especially, but one gets distracted with moral lessons about sexual purity and religion and family. One also gets distracted by the unfortunately histrionic and melodramatic writing.

Ultimately, much like the young woman at the start of the story who suffocates beneath her mother’s Christian mania, I found myself choking on forced themes, mediocre prose, and uninteresting conflict. Where King’s evil tends to be rooted in humanity, even when it is supernatural, Koontz’s is just monstrous. There’s no reason to fear it, because it’s too unreal to care about. It was too fantastic, I suppose, to mean anything. But for some, that might be fun.

9 Comments on “The Funhouse by Dean Koontz”