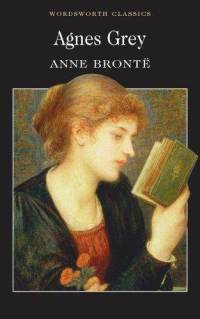 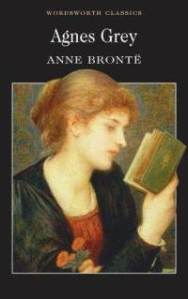 Agnes Grey is the first novel of the youngest Brontë sister, Anne.  It is based in large part on Anne’s life and was created with the use of Anne’s personal diary and letters.  It was also the first of the sisters’ works to be written/completed, although all three sisters (Charlotte, Emily & Anne) would publish their first works within the same one-year time period.  The story is essentially a failed bildungsroman; Brontë intends to send her heroine, Agnes, on a coming-of-age journey, which would be developed through her tenure at various households, where she is employed as governess.  But because Agnes never truly develops (partly because she started her journey as a positive person in the first place, and partly because growth was stunted by the families she served – horrid folks!), the story never reaches true bildungsroman potential.  The purpose of the story, though, is to expose certain deficiencies in the class system and in human nature, which is ultimately achieved despite the main character’s lack of growth.

Perhaps the primary failing of this novel is that there is little concern for character growth and/or development.  Neither Agnes, nor her sister or parents, nor the members of the families she works for, nor her love interest ever change in any way, except  that Agnes develops a slight awareness for the darker side of human nature (to which she had been sheltered, having come from a loving home and positive community).  There is some change in a secondary character, Rosalie, after she departs from home, where she is being instructed by Agnes, to become the wife of Sir Ashby.  Rosalie, a serious flirt, had one goal in life: to marry a wealth man and become a Lady.  That accomplished, she soon realizes that her dreams had not come true after all, and she tries, in some small way to make amends with Agnes.  Of course, this change is not truly growth, because it is ultimately self-serving; Lady Ashby has been essentially imprisoned at home, with no friends, so the minor changes in her manner towards Agnes are the result of desperation, rather than real emotional or moral development.   Despite the characters lacking any major transformation, they fit well with the story being told and their simplicity in a way aids in making the primary themes of the story more apparent.

George Moore, an Irish novelist, praised Agnes Grey as being “the most perfect prose narrative in English letters.”  He even compared Anne Brontë’s prose & ability to her predecessor, Jane Austen.  It is not difficult to understand why he thought so highly of her abilities, as the style and prose of this novel are its greatest achievements.  The prose is similar to Austen in its subtlety and its ability to be witty/ironic without being necessarily overt.   The style is simple but effective, it progresses the story smoothly and naturally, without much fanfare, but never feels stunted or boring.  At times, I was comparing themes to Clarissa, but where Richardson is often repetitive and overbearing Brontë tends to make a point and then move on.   In addition to effective prose and style, there is an employment of dialogue which is more than competent – it is natural and in many ways imperative to the story, as many of the elements, such as characterization, are revealed through dialogue.

Although certain elements of the story are underdeveloped (primarily characterization but also, to an extent, plot arc and setting), it is clear that Brontë knows what she wants to say, and says it well.  She tackles multiple themes, but at the forefront of these are oppression of women and mistreatment of governesses/maids.  In both of the families that Agnes serves, she is treated not just as an inferior, but almost as a non-entity.  The male children are also clearly favored over the female and the maids are treated with no respect or consideration.  It is clear that Brontë is driven to expose and refute the “natural” superiority of men over women, but also of one class over another.  In addition to these primary themes are also those of isolation and tutelage.  Anne, upon leaving home, finds herself entirely without friends or significant relationships of any kind.  While there is some despair in this, Brontë also posits the idea that isolation can be an opportunity for self-reflection, study, and intellectual/spiritual growth.  This theme carries on to one of tutelage, wherein Brontë, through her narrator’s isolation and experiences, can instruct the reader on certain ideals – particularly her beliefs of right and wrong- without breaking from her prose into narrative sermonizing.  Another prominent theme is one of Empathy, for mankind and animals.  Brontë is clearly disturbed by those who treat animals cruelly, as she is disturbed by people who treat others (particularly their servants or “inferiors”) with disdain.  Brontë clearly views empathy as a virtue, but one which is difficult or perhaps impossible to instill in others (as demonstrated by Agnes’s inability to impart this virtue on her charges).

“All true histories contain instruction; though, in some, the treasure may be hard to find, and when found, so trivial in quantity, that the dry, shrivelled kernel scarcely compensates for the trouble of cracking the nut.”

“Reading is my favorite occupation, when I have leisure for it and books to read.”

“It is foolish to wish for beauty.  Sensible people never either desire it for themselves or care about it in others.  If the mind be but well cultivated, and the heart well disposed, no one ever cares for the exterior.”

“I always lacked common sense when taken by surprise.”

“I wondered why so much beauty should be given to those who made so bad a use of it, and denied to some who would make it a benefit to both themselves and others.”

“The end of Religion is not to teach us how to die, but how to live; and the earlier you become wise and good, the more happiness you secure.”

“Alas! how far the promise of anticipation exceeds the pleasure of possession!”

“To think that I could be such a fool as to fall in love! It is quite beneath the dignity of a woman to do such a thing. Love! I detest the word! As applied to one of our sex, I think it a perfect insult.”

Read as part of the Victorian Celebration

← Don’t Miss It Monday!
Books and Loss (In Memoriam) →