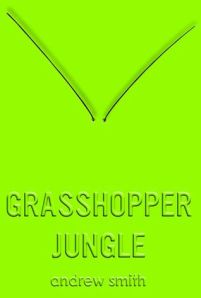 Here’s the thing, though.  The premise of the book, as outlined above, might sound a bit ridiculous.  And, in spots, it’s far from believable.  This is because it’s rooted in science-fiction which, by its very nature, is not meant to be entirely realistic; yet, we know that much of science-fiction has indeed anticipated our actual scientific discoveries and technological advancements (anyone notice that Star Trek had tablets and wireless communication devices decades ago?). On the surface of Grasshopper Jungle, then, is an action-packed coming-of-age story with groovy, original and horrifying science-fiction elements.  Dig deeper, though, and you’ll find that Smith is asking some seriously profound questions about life, power, love, independence, and responsibility.

So, maybe mutated humanoids-turned-insects who breed like there’s no tomorrow (‘cause there ain’t, folks) isn’t your bag.  This book is still probably for you.  Why?  Well, because of everything else that Andrew Smith gives us in this book.

For example, we are saved from totally wigging-out over the nasty self-inflicted bug invasion at the core of the story by the presence of three very real, very believable, and very human protagonists who happen to be mired in a wonderfully messed up ménage à trois.  Robby loves Austin.  Shann loves Austin.  Austin loves them both.  It’s confusing and it’s painful.  It’s erotic and it’s maddening.  It’s teenage life in the Midwestern United States, where a young man is coming to terms with his sexuality, his family history, and, yeah, the realization that he just might be the destroyer of the world, the savior of it, and the chronicler of the whole damn thing, too. Holy shit.

What else can I say about this book?  Andrew Smith understands young adult males like few writers out there today.  He also has a superhuman ability to weave incredibly fantastical tales with deeply moving stories about the human experience and what it is like to grow up feeling different.  After Stick, and Winger, and so many other incredible books, it is impossible to deny that Smith has a cosmic connection with the teenage male psyche and all that comes with it.  So if you are prepared to enter that deeply disturbing, sometimes heartbreaking, but always hilarious world of the teen boy mind, then you will find no better avenue than this.

“We never heard sirens in Ealing. It’s not that bad things never happened here, it’s just that nobody ever bothered to complain about it when they did.”

“History does show that boys who dance are far more likely to pass along their genes than boys who don’t.”

“I was on the conveyor belt toward the paper shredder of history with countless scores of other sexually confused boys.”

“Good books are always about everything.”

“History never tells about people taking shits. I can’t for a moment believe that guys like Theodore Roosevelt or Winston Churchill never took a shit. History always abbreviates out the shit-taking.”

“History shows that an examination of the personal collection of titles in any man’s library will provide something of a glimpse into his soul.”

← J.K. Rowling Can Say What She Wants
Ten Influential Books in My Life →